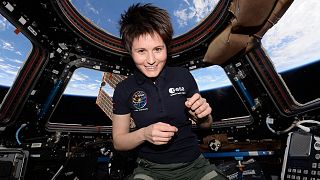 Samantha Cristoforetti in orbit around the Earth onboard the International Space Station.   -   Copyright  NASA/ESA
By Oceane Duboust  •  Updated: 28/09/2022

Her tasks will be to maintain communication with the teams on Earth and to coordinate the crew’s response in the event of an emergency. She will also be responsible for the performance and wellbeing of the astronauts in orbit, according to the European Space Agency (ESA).

"I am humbled by my appointment to the position of commander, and look forward to drawing on the experience I’ve gained in space and on Earth to lead a very capable team in orbit," Cristoforetti said in a statement earlier this month.

During the traditional handover ceremony, which was broadcast live from the ISS, Cristoforetti symbolically received a key from the previous commander, Russian cosmonaut Artemyev.

Born in Milan in 1977, Cristoforetti studied mechanical engineering and then joined the Italian Air Force as a pilot before becoming captain.

She was selected by the European Space Agency in 2009 to become Italy’s first female astronaut.

By 2015, she had set a record by spending 200 days on a single mission in space, at the time the longest continuous space flight by a woman.

Since that time, the ISS has become "busier," in her words.

"There are so many more experiments. There is so much more equipment. […] I think that the Space Station programme and all the international partners, including ESA, have really stepped up their game in terms of the sheer quantity and variety of activities that are on the Space Station," she said in aninterview with the Financial Times in June.

Throughout her ESA mission known as Minerva, Cristoforetti has already carried out extensive scientific research, living and working in microgravity 400 km above Earth.

ESA describes the ISS as a "stepping stone for future exploration".

"Lessons learnt from our time on board have fed into technology that will take European explorers to the Moon and potentially even farther in the not-too-distant future," the agency explains in a presentation of Minerva.

An inspiration for younger generations

On top of her prominent scientific activities, Cristoforetti has charmed the public with her humorous educational videos on TikTok.

These cover a broad range of topics – from working out in space to looking after a spacesuit. Some snippets of her daily life have racked up over one million views.

@astrosamantha What’s your workout routine??? #SpaceWorkout#MissionMinerva#SpaceTok♬ All Around the World(La La La) - R3hab / A Touch of Class

She is also on the list of personalities with their own Barbie. The doll was launched last year and part of the proceeds were used to set up a scholarship celebrating “Women in space”.

When not floating in microgravity on board the ISS, the polyglot (she speaks five languages: Italian, English, German, French and Russian) is also a UNICEF ambassador.

David Parker, ESA’s Director of Human and Robotic Exploration, highlighted her inspirational role: "As the first European woman to fulfil the position of commander, she once again pushes forward boundaries for female representation in the space sector".