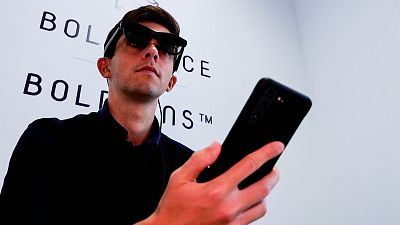 Dan Scarfe, the founder of a new company that has found a way to unlock conversation for deaf and hard of hearing people, says the idea dawned on him over Christmas with his family last year.

Scarfe witnessed his 97-year-old hearing impaired grandfather struggling to engage with the rest of his family, and was inspired to find a solution so that he could participate in conversations in real-time.

“It's just so difficult when there are so many people around you and you're trying to keep track of the different conversations which are going on,” Scarfe told Euronews Next.

“It’s got to the point now where he literally just sits in silence. And I thought, well, hang on a second. He watches TV all the time with subtitles. Why can't we subtitle the world?”

The AR glasses are connected to a mobile phone which handles the processing and graphics generation.

“What our software effectively does is it takes an audio feed from the microphone on these glasses [and] sends it down to the phone,” said Scarfe.

“On the phone we are effectively turning that audio into closed captions and then, using that Nreal software, we can project those subtitles into the real world”.

Scarfe insists the conversation data will only be stored on the users’ personal device as opposed to somewhere in the cloud, and will be fully owned by the user.

While the new device has been hailed as a game changer with the potential to transform lives by organisations like the Royal National Institute for Deaf People (RNID) and DeafKidz, the invention is not without its hitches.

The transcription, based on Amazon's Alexa transcription service, struggles to understand group conversations when people speak over each other.

It also needs a fairly quiet environment for it to be as accurate as possible.

Still, Scarfe insists that this is just the beginning.

XRAI Glass launched its service for the first time to about 100 beta testers on Friday.

“We're going with a small number to begin with to prove it out, to get the feedback, to understand what people like, what they don't like,[and] rapidly innovate on that,” said Scarfe.

“And then we're hoping if the winds are behind us, then we will reach general availability by September”.