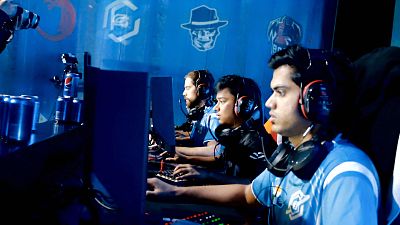 In 2016, India’s esports scene was in its infancy.

The arrival of investment from US company OpTic Gaming in 2018 changed everything. Up until then, the country had suffered from a lack of purchasing power, with pro-gamers unable to access the high-spec machines they needed.

"We really had to import expertise. OpTic Gaming was essentially the embodiment of every bedroom gamer’s dream," adds Patel.

And it was these "bedroom gamers" the company was keen to attract. What could possibly go wrong?

The importance of OpTic

"It was very important to me to make sure that India was a focal point. I thought there was huge potential there,"

OpTic decided to focus its attention on Counter-Strike, a first-person shooter game with a legacy of over 20 years and a huge fan base.

"The goal of the OpTic India project was firstly to become the best in India as soon as possible, and then put India on the map," explains Prashant Prabhakar, esports entrepreneur at Sostronk.

In order to do this, OpTic held tryouts for a new esports team in the southern city of Bangalore. Thousands of young gamers applied, with many travelling from remote cities to attend.

"A lot of young talent that we found, would never have been found had it not been due to the tryout," Nishant reveals.

Of the thousands who applied, only five were selected and sent to Bangalore Boot Camp, where they lived and worked together.

A player by the name of 'Forsaken' was one of the chosen five. Selected more for his brains than his reflexes, his fellow team members admit they’d heard rumours about his "shady" past.

"Although people were saying he was fishy, we didn't have any proof or any concrete evidence to, you know, bench him or kick him out of the team," says Sabyasachi Bose, a team member.

The group forged ahead, winning the Indian qualifying matches for an international tournament in Shanghai, explains Prashant.

"The Zowie Tournament is one of the best opportunities for Indian teams to compete against the best Asia has to offer."

One map away from winning

"We played Vietnam, a must-win game for us, and I was having a very good game. Yeah, I was, you know, single-handedly destroying them,” says Sabyasachi."

"OpTic India were just one map away from winning," claims Nikhil Hathhiramani, Editor-in-Chief at CSGO2Asia, referring to the map-based levels in the game.

"It was halfway through the map when we noticed that the admins had called a pause.

"A pause usually happens when there’s been a technical issue, such as a monitor turning off, or someone’s device not working properly. But it soon became clear that something else was happening.

"We saw not just one admin, but slowly a second admin and then probably five minutes later a third admin,” says Nikhil.

It became obvious that something serious was unfolding, Forsaken had been caught cheating.

As Prashant sees it, an event like this is incredibly rare. “He cheated while representing one of the biggest orgs in the world, while competing in one of the largest tournaments in Asia, it is quite a one-in-a-million kind of incident.”

So how did Forsaken do it? How did this unknown player manage to cheat?

"This guy had a special button at the side [of his mouse] and if he pressed that button, that's when the cheat gets activated, and his aim automatically snaps to the nearest target," says Umes Umesh Kripalani, Talent Manager at Caster.

This was a “premium cheat” according to Nikhil, one that Forsaken would have paid for.

His teammates, disqualified from the tournament, were devastated. "I was crying the whole time holding the Indian flag," says Sabyasachi.

Even more troubling was the racist abuse that was aimed at the team. And with so much internal and external pressure, there was no choice but to disband.

"Almost immediately, everyone was allergic to that region and that scene," says Nikhil.

A wake up call for Indian esports

Though the incident initially had a negative impact, it led to lasting change. "We clearly realised that we don't have enough checks and balances in place," says Nishant.

As a result of increased checks, esports in India are now in great health, with the current generation the first to make a career out of online gaming.

"If I were to look back 10 years, we would be extremely happy back then if someone paid for us to take a 24-hour train from Mumbai to Bangalore," says Nishant.

A dream come true? The challenges of being an esports star