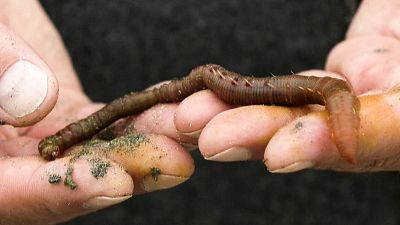 Along the coast in the Saint Jean du Doigt commune of northern France, Franck Zal, shovel in hand, is surveying the beach in search of sea worms that have buried themselves under the sand.

Zal, a marine biologist and the CEO of French biotech company Hemarina, has discovered unique qualities in the creatures that could one day be harnessed for use in human transplants.

"We can see that there are a lot of arenicoles (sea worms) on this beach, probably several tens of tons," Zal said.

"What interested me was to try to understand how this worm was able to breathe both underwater and in the air".

At low tide, Zal explained, sea worms like this are able to live off the oxygen reserves that they secure at high tide, sort of like a little oxygen tank for the marine worm.

Giving oxygen to the graft or transplant

It’s this quality - the ability to conserve oxygen and release it slowly - that could be a gamechanger in ensuring that human transplants and grafts can function effectively when they are performed.

"Transplantation is a race against time," Zal noted.

According to Zal, the goal is to develop a product to give oxygen to the graft or transplant so that it can stay "alive" longer before it is transplanted into the patient.

This, he says, could give the graft "the best possible chance of staying much longer in the recipient".

The product Hemarina has developed using the worms is called "Hemo 2 Life product" and is currently undergoing tests to see if it is viable for use in organ transplants, blood transfusions and dental products.