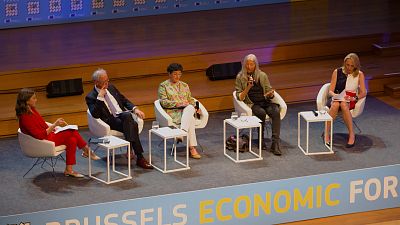 In this week's episode, Real Economy speaks to the IMF’s Deputy Managing Director Gita Gopinath and the EU’s Commissioner for Trade Valdis Dombrovskis about the economic fallout of Russia’s war in Ukraine.

The team also looks ahead to the EU's flagship economic event, the Brussels Economic Forum, focusing on some of the big challenges that the young and future generations will face.

Russia’s war is first and foremost a tragedy for the people of Ukraine. Europe's immediate response has been to show solidarity and help the refugees. Now, as food and energy prices soar, and as Europe moves urgently to end its dependency on Russian energy, what does it mean for the EU’s economy? That will be the big question at the Brussels Economic Forum later this month.

To get a global perspective on all this, Naomi Lloyd spoke to Gita Gopinath, number two at the International Monetary Fund in Washington.

The war in Ukraine will have a significant effect on almost all of Europe.

"How far-reaching will the economic impact of the war be on Europe and what will it mean for our everyday lives?"

"The war in Ukraine will have a significant effect on almost all of Europe. We downgraded our growth projections for major European economies by about one percent to - now what we are projecting is - three percent for this year. At the same time, we are projecting inflation to be significantly higher. So the most direct effect that we're seeing on people's lives, of course, outside of Ukraine and the refugee crisis, that we're seeing there, is the fact that commodity prices have gone up, energy costs have gone up substantially. And that is affecting people's purchasing power. And the impact of the war and the sanctions haven't played out fully at this point."

"Given all of this, what steps does the EU need to take to ensure a strong economic recovery, especially for young people?"

"So the pandemic in the first place was particularly hard on young people and now you have the war and the high uncertainty that goes around with the war and that's having confidence effects. That is affecting how businesses hire. And you can see that that would also tend to affect younger workers who are just entering the workforce. So in terms of what needs to be done, we do see an argument right now to provide targeted support in terms of, say, cash transfers to households that are getting hard hit by these rise in energy prices. It is also important to invest. We need the green transition to happen while at the same time paying attention to energy security. A climate investment fund would also be very helpful."

Gita Gopinath will be one of many high profile speakers at the Brussels Economic Forum on May 17. It's where the top decision-makers, academics, civil society and business leaders debate Europe’s biggest economic challenges.

The EU’s flagship economic event has been running for over 20 years and 2022 is the European Year of Youth.

But right now, what kind of future awaits the next generation? To answer that question Real Economy spoke to some young economists and politicians who will be present at this year’s Brussels Economic Forum.

Between the climate crisis, robotic automation and the threats to democracy, the world is rapidly changing.

Elected three years ago, Danish MEP Kira Marie Peter-Hansen spoke of her growing concern about what the next few years have in store.

"I am afraid that we won't reach the climate goals. I'm afraid that we will see in Eastern Europe a block going backwards in democracy and human rights. And then we will face challenges in our democracy and that we will be standing in a new Cold War, so to say. But at the same time, I'm also very hopeful and I think we can manage all of these crises. And also looking at the young generation, that really fills me with hope."

Each generation has its own share of challenges, but those facing generations Z and Alpha seem colossal.

The financial and economic crises stemming from 2008, followed now by the COVID-19 pandemic. Added to that mix are the ongoing climate crisis and the war in Ukraine.

In addition, the digital and technological revolution is set to shake up the world as we know it. When it comes to this transformation, Professor Roxana Mihet from the University of Lausanne, says governments face a tough balancing act.

"The future we will have tomorrow is going to depend on the policies that we implement today in order to balance the benefits and the cost of the digital transformation. And I think around the world, governments need to be careful in how and when to regulate these technologies because too little regulation is going to harm individuals. But too much regulation can also harm them and can also harm economic growth."

Moving forward with both the green and digital transition will be vital for this generation born with a smartphone in their hands. But how do we make sure that these big disrupting trends don’t increase social inequality?

Diego Känzig, a PhD candidate in Economics at the London Business School says while everyone can play their part by changing their behaviour, he believes governments need to set the agenda.

"I think it's really up to the politician to set out basically a framework that allows us to reduce carbon emissions and incentivise these changes in behaviour that we need to confront this climate challenge. And the European Union is doing a lot on that front."

...we must move away from our dependency on Russia’s fossil fuels.

To find out more about what economy we are handing to the next generation and what needs to be done to make sure it's in good shape, Real Economy spoke to the European Commission’s Executive Vice President and Trade Commissioner Valdis Dombrovskis.

"What steps need to be taken to ensure a strong recovery for Europe?"

"First of all, obviously, it's important to work to stop the war in Ukraine. I think it's an aim which we must pursue on its own right. But it's also clear that the faster we stop the war, the better it allows also economy to recover. It's important that we strengthen the resilience of European economy, that member states are putting the financing available in recovery and resilience facility in a good use. Also, it's clear that we must move away from our dependency on Russia’s fossil fuels."

"How concerned are you that we won't meet Europe's climate goals?"

"We are clear that we must stay the course as regarding our climate goals: 55 percent reduction by 2030 and climate neutrality by 2050. And I would say the fact that we are now accelerating, moving away from Russian fossil fuels is not contradicting this - because that's exactly the aim of the Green Deal."