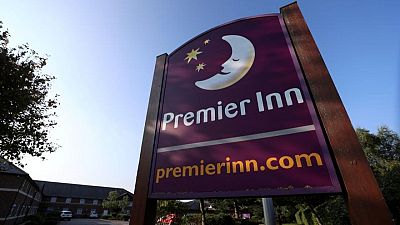 -Premier Inn owner Whitbread resumed dividends on Thursday and said profit at its UK business could return to pre-pandemic levels this year despite inflationary pressures.

Shares in the company were up 3.4% at 1140 GMT as Britain’s largest hotel chain also reported annual revenue that beat market expectations after UK accommodation sales surpassed pre-pandemic levels during the summer and autumn seasons last year.

“As we move through the year in the UK, we expect international inbound demand to increase, alongside recovering office-based corporate demand, complementing the already high levels of leisure and business trade demand,” Whitbread said in a statement.

The London-listed company, which started out as a brewery in the eighteenth century, said UK accommodation sales for the year ended March 3 had nearly trebled from the previous year when pandemic restrictions were still in place.

It proposed a final dividend of 34.7 pence per share, its first since suspending payments in 2020.

“With (the dividend) back on the table, it sends a clear message to markets that sentiment is vastly improved and the return to profitability … adds weight,” Hargreaves Lansdown analyst Matt Britzman said.

“The recovery is by no means complete and there’s still a way to go before the group’s out of the woods,” he added.

Whitbread said its German business had been recovering at a slower pace as coronavirus curbs in the country lasted longer, but it was confident business there would return to strong levels this year.

It also warned industry-wide cost inflation would reach 8%-9% this financial year, higher than initially thought, as British households and businesses bear the brunt of inflation reaching its highest in three decades.