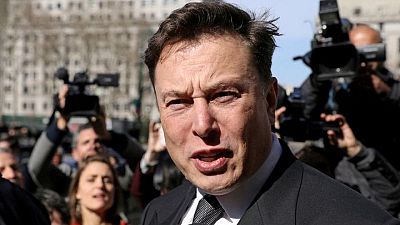 <div> <p> – Billionaire entrepreneur Elon Musk tweeted a series of dashes for a missing word followed by “is the Night”, days after he offered to buy Twitter Inc for $43 billion.</p> <p>The offer from Musk, who has hinted at the possibility of a hostile bid, has prompted the social media company to adopt a “poison pill” to protect itself.</p> <p>Musk, who is also the chief executive of electric-vehicle maker Tesla Inc, on Saturday tweeted “Love Me Tender”, an Elvis Presley song, after Twitter opted for a plan to sell shares at a discount to prevent any attempt by shareholders to amass a stake of more than 15%. Musk currently has a 9.1% stake.</p> <p>The New York Post on Tuesday reported Musk was willing to invest between $10 billion and $15 billion of his own money to take Twitter private, citing two sources familiar with the matter.</p> <p>The billionaire, who is Twitter’s second-biggest shareholder, is planning to launch a tender offer in about 10 days and has tapped Morgan Stanley to raise another $10 billion in debt, according to the report https://nypost.com/2022/04/19/elon-musk-scrambles-to-find-backers-for-twitter-takeover-sources.</p> <p>Musk may also be willing to borrow against his current stake if necessary, a move that could possibly raise several billion additional dollars, according to the New York Post report.</p> <p>Twitter declined to comment. Tesla did not immediately respond to a Reuters request for comment from Musk.</p> <p>More private-equity firms have expressed interest in participating in a deal for Twitter, people familiar with the matter told Reuters on Monday without naming the firm.</p> <p>The interest emerged after Thoma Bravo, a technology-focused private-equity firm, contacted the social media platform last week to explore a buyout that would challenge Musk’s offer.</p> <p>Apollo Global Management Inc is considering ways it can provide financing to any deal and is open to working with Musk or any other bidder, the sources told Reuters.</p> <p>Many investors, analysts and investment bankers expect Twitter’s board to reject Musk’s offer in the coming days, saying it is inadequate.</p> <p>(The story is updated to correct paragraph 3 to say Musk tweeted an Elvis Presley song on Saturday, not Monday)</p> <p/> </div>