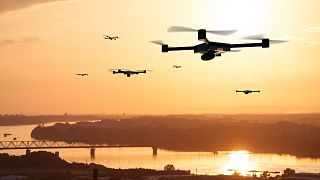 Some bad news is in store for those irritated by the unmistakable buzzing of electric drones: they’re not going away anytime soon. In fact, they are set to become only more ubiquitous.

If estimates from SESAR - a European partnership tasked with overhauling European airspace and air traffic management - are to be believed, by 2050 there could be close to 7.5 million personal and commercial drones zipping through European skies.

To prepare for this new reality, researchers in Spain are testing out a new system that will, hopefully, keep these drones from crashing into each other.

The BUBBLES project has drawn together researchers from academia, industry and European institutions with the aim of developing a so-called separation management system for unmanned aircraft systems (UAS).

Israel Quintanilla, professor of aerospace engineering at the Polytechnic University of Valencia and communications lead for the BUBBLES project, explained the project to reporters.

“What BUBBLES does is generate security bubbles around each drone, based on algorithms that calculate the risk of collision in real time,” he said.

“If there is (such a risk), the platform is even capable of proposing evasive manoeuvres to the pilots, taking into account their position”.

Defibrillator drones aim to beat paramedics to save cardiac patients