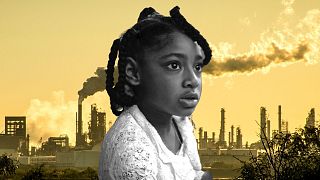 Nine-year-old Ella Adoo-Kissi-Debrah died in 2013, and a years-long inquest ruled air pollution as a cause of her death.   -   Copyright  Canva / portrait courtesy of The Ella Roberta Family Foundation
By Natalie Huet  •  Updated: 07/04/2022

The mother of a girl killed by air pollution says it’s about time we consider the state of our planet and the health of our children as two sides of the same coin.

In 2013, nine-year-old Ella Adoo-Kissi-Debrah, who lived near a busy road in London, died from a rare form of asthma.

A years-long inquest made her the first person in the UK - and potentially the world - to have air pollution listed on her death certificate.

Nearly a decade later, her mother Rosamund continues to campaign for people’s right to clean air.

On World Health Day, which is marked on April 7 and whose theme this year is “our planet, our health,” her message seems more relevant than ever.

"I believe that when you talk about the ice melting and things like that, people on a day-to-day feel far removed from that," she told Euronews Next.

The COVID-19 pandemic, meanwhile, has shown people care deeply about their health, she said.

"So I think we need to change the messaging. I think people need to see the climate crisis as a health crisis".

The European Environment Agency says air pollution is the single greatest environmental risk to health in Europe, and nearly everyone in the world is breathing air that doesn’t meet the World Health Organization's (WHO) quality guidelines, due to pollutants released by the burning of fossil fuels.

I believe that when you talk about the ice melting and things like that, people on a day-to-day feel far removed from that.

WHO estimates that more than 7 million people die each year from air pollution alone - more than from AIDS, tuberculosis and malaria combined. That includes around 500,000 children who die before the age of five.

But Adoo-Kissi-Debrah knows that statistics like these don’t necessarily do much to raise awareness - personal stories do.

28 trips to the hospital

Ella lived with her family just 25 metres from one of the busiest roads in London, the South Circular Road.

Her mother says she was an energetic and funny girl who loved music, sport and reading but who began struggling to breathe when she was just 6 years old.

Adoo-Kissi-Debrah had to rush her to hospital 28 times in 28 months for severe respiratory issues.

"She suffered enormously. If you think about someone being poisoned alive - that's how much she suffered," she said.

Ella was diagnosed with life-threatening asthma at the age of 7, and was admitted into intensive care five times and put into an induced coma when her lungs gave up on her.

In a landmark December 2020 ruling, the coroner said the young girl had "died of asthma contributed to by exposure to excessive air pollution".

'Clean up the air'

Adoo-Kissi-Debrah founded the Ella Roberta Family Foundation to help London children suffering from asthma. She’s now also an ambassador for the UN campaign BreatheLife, which aims to get cities to meet the WHO’s air quality targets by 2030.

This, environmental experts say, requires swiftly moving away from burning fossil fuels and switching to cleaner, renewable sources of energy such as solar, wind and hydroelectric power.

"We all know what the sources of air pollution are. We just need to get on and clean up the air," Adoo-Kissi-Debrah said.

She said the energy crisis caused by Russia’s invasion of Ukraine - which sent the prices of oil and gas soaring - made it a good time to transition to renewables.

"I feel if we don't grab the opportunity now, it's something we will regret in the future," she said.