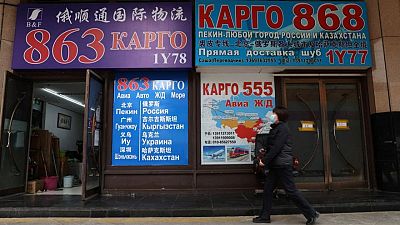 SHANGHAI/BEIJING – Chinese exports to Russia have been buffeted as the rouble swings in value, clear evidence of a ripple effect that Western sanctions over Russia’s invasion of Ukraine are having in China, even as it sticks by its neighbour diplomatically.

Chinese multinationals have stayed in Russia while their Western rivals flee but it is smaller Chinese companies that are more vulnerable to exchange rate losses, with several telling Reuters that much of their Russian business is on hold as both sides wait out the volatility.

“The products I was supposed to send to Russia are sitting in my warehouse,” said Deng Jinling, whose factory in eastern China makes vacuum flasks.

Another Chinese trader, who only gave her surname Guo, said her firm acted as a middleman between Russian and Chinese clients but the volume of products such as bed sheets and kitchen equipment they usually handle had dropped by a third.

China is Russia’s biggest source of imports and sold $12.6 billion of goods to Russia just in January and February – mostly computers, cars, shoes and toys, according to customs data.

Both Russian importers and Chinese exporters are putting off business on fears of being caught out by the roller-coaster rouble.

“The depreciation of the rouble means that you lose money every time there’s a sale,” said Shen Muhui, who heads a trade group representing more than 20,000 small Chinese exporters to Russia.

He said a few more Russian customers were willing to use Chinese yuan to pay for goods but not enough to make much of a difference, and demand for his warehousing services in Russia had slumped by about a fifth since the Ukraine war began and about 90% of his members had been affected.

“You can’t raise prices because the Russians can’t afford it … So you make a loss when converting your receipts into yuan,” Shen said.

The rouble has seen huge volatility against both the U.S. dollar and Chinese yuan since Russia launched what it calls a “special operation” in Ukraine on Feb. 24.

The conflict triggered a slump of more than 40% in the rouble’s value against the yuan, though the Russian currency has rebounded roughly 70% since a March 9 low.

Against the U.S. dollar, the rouble tumbled as much 44% in just seven trading days following the invasion, but has surged nearly 90% since its March 7 low, trading at around 81 to the dollar in the interbank market.

China has declined to condemn Russia’s action in Ukraine or call it an invasion and it has repeatedly criticised what it calls illegal and unilateral sanctions.

Major Chinese companies such as Xiaomi and Great Wall Motor have largely stayed silent on their Russia plans.

But behind the scenes, China is wary of its firms running afoul of sanctions and is pressing them to tread carefully with investments there, Reuters reported on March 25.

State-run Sinopec Group has suspended talks on a major petrochemical investment and a gas marketing venture in Russia, the sources said.

Winnie Wang, president of the Shenzhen Cross-Border E-commerce Association, was optimistic about trade with Russia in the long term, saying she expected Chinese exports to increase in variety and volume, despite short-term challenges including the currency volatility.

Wang said she hoped traders could wean themselves off U.S. dollar settlement.

“The two countries should work together to design a new payment framework for trade,” she said.