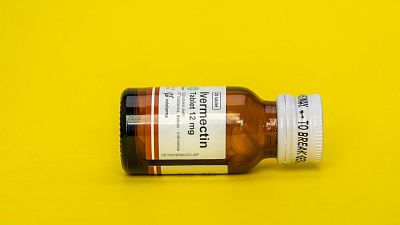 The study found that ivermectin, which is normally used to treat parasites, has "no significant effects" on COVID-19   -   Copyright  Canva
By Tom Bateman  •  Updated: 01/04/2022

Ivermectin, an antiparasitic drug that was pushed as an "alternative" cure for COVID-19 by social media groups and high-profile podcaster Joe Rogan, has "no significant effects" when used to treat the coronavirus, according to the biggest study yet of the drug's potential.

The TOGETHER study saw 3,515 COVID-19 patients in Brazil randomly assigned one of three treatment paths: ivermectin, a placebo, or a third option.

Neither doctors nor patients knew which of the three options each individual was given.

The peer-reviewed results of the study, published in the New England Journal of Medicine, showed that patients who were given ivermectin experienced similar outcomes to those who received a placebo.

In all, 14.7 per cent of the ivermectin group were hospitalised due to worsening COVID-19, or experienced an emergency room visit of more than six hours due to their deteriorating condition, compared to 16.3 per cent of the placebo group.

All patients selected for the study were aged over 18 and had at least one condition placing them at higher risk of severe COVID-19.

"In this randomised trial, the administration of ivermectin did not result in a lower incidence of medical admission to a hospital or prolonged emergency department observation for Covid-19 among outpatients at high risk for serious illness," the researchers concluded.

Commonly used for treating parasites like head lice in humans, as well as being a common dewormer for large mammals like horses and cattle, ivermectin achieved meme status among anti-vaxx groups online.

This is despite the fact that medical authorities including the US Food and Drug Administration (FDA) and the European Medicines Agency (EMA) advised against using it to treat COVID-19 infections.

In February, an Australian TV channel apologised after sparking a wave of conspiracy theories by mistakenly including a picture of a packet of ivermectin in a news story about Queen Elizabeth II's COVID-19 diagnosis.

The map of our DNA is finally complete. Here's why it matters