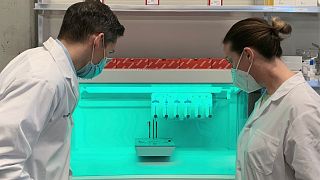 Dr. Ryan Flannigan and research assistant Meghan Robinson observe a 3D bioprinter in their lab at the University of British Columbia.   -   Copyright  UBC Faculty of Medicine
By Natalie Huet  •  Updated: 23/03/2022

Scientists in Canada are using a 3D bioprinter to try to replicate the complex inner mechanisms of human testicles and make sperm in a lab.

And it’s no joke. The researchers managed to print viable testicular cells that they hope will eventually yield sperm from patients with forms of infertility that currently cannot be treated.

The technology is very exciting but will likely take “several years of work” to be refined, Dr Ryan Flannigan, urology assistant professor at the University of British Columbia, told Euronews Next.

His team in Vancouver has been using a 3D bioprinter to create life-size models of human seminiferous tubules – the structures inside the testicles that normally produce sperm.

Stem cells taken from an infertile patient’s testicles didn’t only survive inside the artificial tubes – they thrived and showed early signs of sperm-producing capabilities, the researchers said.

The results of the study were published last month in the journal Fertility and Sterility Science but were only promoted by UBC last week.

In the most severe form of male infertility, known as non-obstructive azoospermia (NOA), the production of sperm within seminiferous tubules fails, and no sperm is found in the ejaculate.

"We’re 3D printing these cells into a very specific structure that mimics human anatomy, which we think is our best shot at stimulating sperm production

In some cases, surgery can be used to retrieve extremely rare sperm, but the procedure is only successful about half the time.

“It’s literally like trying to find a needle in a haystack,” Flannigan said in an interview.

The other half of the men, for whom no sperm can be found, currently don’t have any option to have their own biological child.

Those are the patients Flannigan’s team is hoping to help.

The researchers performed a biopsy to collect stem cells from the testicles of a patient living with NOA.

The cells were then grown and 3D-printed onto a Petri dish into a long and hollow structure similar to the seminiferous tubules that normally produce sperm.

"We sought out to basically 3D print a tubule that was roughly the same size, with our goal of trying to create some similar cell organisation as what we see in the human body,” said Flannigan.

He believes that’s their best shot at inducing sperm production and paving the way to new fertility treatments.

His team found 12 days after printing that the cells placed inside the tubes had survived.

Better yet, they had grown into several of the specialised cells involved in sperm production and were showing a significant improvement in so-called spermatogonial stem cell maintenance – both early signs of sperm-producing capabilities.

"The ultimate goal is to create a regenerative therapy where we can do this all the way from a stem cell to a full-grown sperm, and then use that sperm in the process of IVF

The team has labelled the findings a “huge milestone”. But seeing those cells survive and start to differentiate into more specialised cells is only part of a “long road ahead’.

Flannigan told Euronews Next his team had done a longer culture of the cells for around 70 days - the time it normally takes humans to produce a fully functional sperm cell.

The research is ongoing and hasn’t been reported at this stage, but Flannigan said the cells survived.

“That will be some of the directions we're moving forward - taking it from this 12-day experiment and then moving it to a longer time course and really trying to understand what these cells need in order to fully develop through that sperm production process”.

The team is now actively working to “coach” the printed cells into producing sperm. To do this, they are exposing the cells to different nutrients, temperatures and growth factors and trying to help the cells better interact with each other.

Even if the cells don’t reach the stage of full-grown sperm, it’s hoped the research will help treat the patient by identifying what is blocking his sperm production.

If the team can get the cells to produce sperm, these could potentially be used to fertilise an egg by in vitro fertilisation (IVF), providing struggling couples with a new treatment option.

“That journey is probably the longest one because there's a lot of variables to optimise and to experiment with to get those cells there,” he added.

“And then, of course, there's safety data that's absolutely critical to have - to ensure that if we arrive at something that we're proposing for a human treatment, that we understand it well and we understand that it is safe and appropriate to use, and use in humans”.