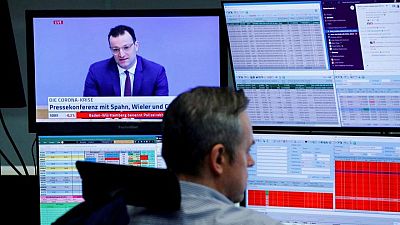 -March was expected to be a busy window for Europe’s stock market listings, but Russia’s move to redraw borders in Ukraine and market uncertainty due to the escalating security crisis on the continent are prompting companies to put their plans to go public on ice.

Proceeds raised so far this year by companies going public in Europe, the Middle East and Africa are down 79% to $3.1 billion compared to the same period last year, when companies raised $15.1 billion in what was a record-breaking year for equity capital markets activity in the region, according to Refinitiv data.

Expectations had previously pointed to a busy March window for initial public offerings (IPO) this year after several deals were postponed from the end of 2021.

March typically marks the beginning of the IPO season as most companies wait to close their financial year to beef up their IPO prospectus with their most recent results.

But the pipeline ahead is under pressure as the United States and its European allies are poised to announce new sanctions against Russia after President Vladimir Putin formally recognised two breakaway regions in eastern Ukraine, dealing a blow to a diplomatic solution to the crisis.

“I suspect a significant disruption and delay to the pipeline due to what has happened. A lot of companies are sitting back, looking at this situation and waiting to list,” said Kasper Elmgreen, head of equities at French asset management company Amundi.

A number of European companies including Spanish bank Ibercaja have kicked large public listings down the road after officially launching the process.

On Jan. 27 Dutch file transferring service WeTransfer scrapped an Amsterdam float that would have valued it at between 629 million euros and 716 million euros.

German artificial limb maker Ottobock is waiting until September to launch its multibillion-euro stock market listing, adding to a series of deals being delayed in recent weeks.

Fears that Moscow will launch a full-scale invasion of Ukraine have taken their toll.

“Any market which is driven by headlines is a tough one, and the impact is negative with respect to adding risk,” said Andrew Briscoe, head of EMEAECM Syndicate at Bank of America.

“Naturally there’s going to be delays and some that need to be a bit more nimble on timing.”

Larger deals that offer greater access to liquidity and high-quality assets are likely to go ahead, several bankers said, but some deals are at a standstill until the situation stabilises.

“Whether you’re a large-cap or a small-cap, it will certainly make most issuers pause and try to take stock, especially when you’re looking at an IPO and a four-week process, and things are changing day-to-day,” a second banker who manages IPOs in Europe said.

Along with a volatile market, the poor performance of some of last year’s IPOs is further increasing investor pessimism, with the likes of Deliveroo to Alphawave trading well below their listing price.

The FTSE Renaissance IPO Index for Europe, the Middle East and Africa is down about 23.5% so far this year.

“If an investor is already quite worried about the state of their current portfolio, it doesn’t usually trigger the right mindset to invest in an IPO,” one senior European equity capital markets banker told Reuters.