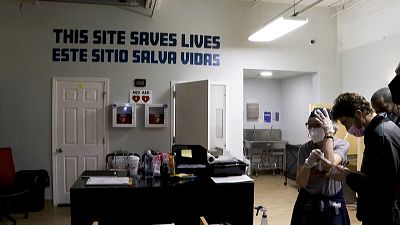 "This site saves lives," reads an inscription on the wall of America's first drug injection centre in New York, which aims to serve as a model in a country blighted by record overdoses.

In the room, there are eight open cubicles all equipped with a chair, a table and a mirror, the latter to quickly see "if anything goes wrong," says 29-year-old Mark, a regular visitor.

"You're monitored the whole time," explains the Californian, who asked to be identified by an alias.

"There's music playing. It's a very non-rushed environment unlike when you're using a public bathroom and people are knocking. That's rushed and you're more likely to miss your injection and cause an abscess," he added.

Mark - who is trying to reduce his reliance on tranquilisers and opiates, an addiction he has been fighting for two years - visits the Overdose Prevention Center in East Harlem.

On the table lie syringes, rubber bands, gauze pads and a multicolored assortment of straws.

In two small rooms, visitors can smoke crack, a cheap derivative of cocaine. A larger room with a TV on the wall serves as a place of rest or for other activities.

Drug overdoses killed 2,062 people in New York alone in 2020, the height of the city's COVID-19 pandemic, with higher rates in poorer neighborhoods and Black communities.

Some 77 per cent of cases in New York in 2020 involved the powerful synthetic fentanyl, which is often mixed with heroin and cocaine, a cocktail that killed The Wire star Michael K Williams in September last year.

Fentanyl is "in everything," laments Sam Rivera, director of OnPoint NYC which manages two drug injection centres in New York.

"Every time we tested" a drug, "it had fentanyl," he tells AFP.

It was in the context of soaring incidences of fentanyl overdoses that OnPoint NYC opened the centre inside an anonymous building on 126th Street, with the support of the Democratic-led city government.

Rivera had already been helping users before, with care and prevention. He knew that when some would use the bathroom, they would also take drugs.

"There's a door in between and when we responded to an overdose there was some time between the actual onset of the overdose and then our response," he explained.

Being able to view users injecting themselves at a safe site, a model that has been used in parts of Europe for a while, is a "game changer," said Rivera.

Alsane Mezon, a 56-year-old medical assistant, is one person keeping a close watch, ready to intervene if a person reacts badly to the injection.

"It doesn't happen a lot, at least once a week," she said.

She has oxygen at her disposal, and if that is not enough, there is also naloxone, the main antidote to an opioid overdose.

Rivera told AFP at the beginning of February that staff had intervened during about 130 overdoses at the two sites.

Some visitors "just come for a coffee and watch a movie," even after they stop using the centre to inject, said Rivera, 59.

The injection rooms are a political flashpoint in the United States, with Republican senators accusing President Joe Biden earlier this month of wanting to finance "crack pipes”.

The US federal government does not officially support the centres, but the Justice Department has said it is studying the programme and having "discussions with state and local regulators about appropriate guardrails for such sites, as part of an overall approach to harm reduction and public safety”.

The centre is also causing a stir locally, where East Harlem's community board called for a moratorium on any new facilities for drug users before the centre opened.

Board president Xavier Santiago says the board fears that the centre will attract more drug users to the area.

"It's not from a lack of empathy," he told AFP.

"Many of our families, our friends have been impacted by substance abuse and overdose death".

Keith Humphreys, a psychiatry professor at Stanford who conducted a study with The Lancet on the opioid crisis, believes the centres can save lives but ultimately "have very little effect on the epidemic as a whole”.

Instead, he'd rather see officials make it easier for the public to be able to get and administer naloxone.

For Rivera, there's no time to lose. "We waited too long," he said.