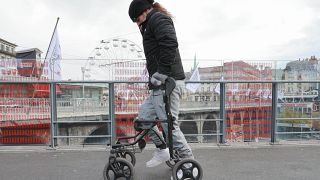 Researchers in Switzerland have developed a nerve stimulation device that has helped patients suffering from total paralysis get on their feet again   -  Copyright  EFPL
By Euronews and Reuters  •  Updated: 09/02/2022

Three patients whose lower bodies were left completely paralysed after spinal cord injuries were able to walk, cycle and swim thanks to a nerve-stimulation device controlled by a touchscreen tablet.

The men, who were completely paralysed in motorbike accidents, are walking, cycling and even swimming again in Switzerland all thanks to an implanted nerve-stimulation device.

The spinal implant is controlled remotely with a touchscreen tablet and uses artificial intelligence.

In theory, in the future, people with spinal cord injuries could use this technology by simply opening a smartphone and selecting an activity such as walk or sit.

"At the very beginning, it's not super easy. But they can immediately activate their legs and step," said Jocelyne Bloch of the Swiss Federal Institute of Technology in Lausanne, who led the study along with scientist Grégoire Courtine.

Within one hour of neurosurgeons implanting prototypes of the nerve-stimulation device, the three men were able to take their first steps and over the course of 6 months, they were able to start learning more complex movements.

How does the implant work?

The technology allows electrical signals to enter the spine from the sides that target and activate specific regions of the spinal cord.

AI algorithms then instruct electrodes on the device to emit signals which stimulate the individual nerves that control the trunk and leg muscles needed for various activities such as getting up from a chair, sitting down and walking.

The software operating the device is tailored to each patient's anatomy.

"To target the specific spots, you need to understand where they are. So for that, we modelise the spinal cord and we understand exactly where the anatomy of the different spots are. And then we design the stimulation following the anatomy of each person," said Bloch.

Both she and Courtine have helped establish a Netherlands-based technology company called Onward Medical that is working to commercialise the system.

The company expects to launch a trial in about a year involving 70 to 100 patients, primarily in the US.

If this study's early results are confirmed on a larger scale, researchers say paralysed people might be able to use their smartphones or smartwatches to move their legs again.