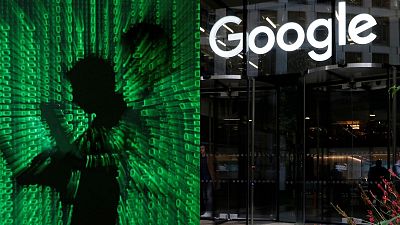 Google invests in offices and North Korean hackers pilfer hundreds of millions of euro in cryptocurrencies.   -   Copyright  Reuters/Kacper Pempel and AP
By Ian Smith  with Reuters and AP  •  Updated: 21/01/2022

Tech giant Google has spent €875 million to buy a central London building where it is currently a tenant, showing its confidence in the future of the office as a place to work, the company said on Friday.

Google, which employs 6,400 people in Britain, is planning a multi-million refurbishment of its offices it is buying within the Central Saint Giles development close to Covent Garden in central London.

"We have been privileged to operate in the UK for nearly 20 years, and our purchase of the Central Saint Giles development reflects our continued commitment to the country's growth and success," said Ruth Porat, CFO of Google's parent company Alphabet.

Google plans to refit the building so it is adapted for in-person teamwork and has meeting rooms for hybrid working, as well as creating more space for individuals.

The new refurbishment will also feature outdoor covered working spaces to enable work in the fresh air, the company said.

Google said it would eventually have capacity for 10,000 workers at its UK sites, including another one being developed in the nearby King's Cross area.

"This investment in jobs from Google is a big vote of confidence in the UK as a world-leading tech hub," UK finance minister Rishi Sunak said in a statement.

Google said last month that it was delaying its return-to-office plan globally amid growing concerns over the Omicron COVID-19 variant.

"From 2020 to 2021, the number of North Korean-linked hacks jumped from four to seven, and the value extracted from these hacks grew by 40 per cent," said the report, which was released on Thursday.

"Once North Korea gained custody of the funds, they began a careful laundering process to cover up and cash out," the report added.

A United Nations panel of experts that monitors sanctions on North Korea has accused Pyongyang of using stolen funds to support its nuclear and ballistic missile programmes to circumvent sanctions.

North Korea does not respond to media inquiries, but has previously released statements denying allegations of hacking.

The Nigerian government has lifted its ban on Twitter after seven months.

The West African country’s more than 200 million people were shut out of the social media network on June 4.

Nigeria cited “the persistent use of the platform for activities that are capable of undermining Nigeria’s corporate existence” as the reason behind the ban.

The action triggered global criticism as it came shortly after the social media network deleted a post by the country’s president Muhammadu Buhari in which he threatened to treat separatists “in the language they will understand”.

He has now had a change of heart and directed Twitter to resume operations last Thursday, according to Kashifu Inuwa Abdullahi, the director-general of the country’s National Information Technology Development Agency.

We are pleased that Twitter has been restored for everyone in Nigeria. Our mission in Nigeria & around the world, is to serve the public conversation.
We are deeply committed to Nigeria, where Twitter is used by people for commerce, cultural engagement, and civic participation.

Abdullahi said that was only after Twitter agreed to meet some conditions, including opening an office in Nigeria.

“[This week's action] is a deliberate attempt to recalibrate our relationship with Twitter to achieve the maximum mutual benefits for our nation without jeopardising the justified interests of the company. Our engagement has been very respectful, cordial, and successful,” he said in a statement.

In addition to registering in Nigeria during the first quarter of 2022, Abdullahi said Twitter has also agreed to other conditions including appointing a designated country representative, complying with tax obligations and acting “with a respectful acknowledgement of Nigerian laws and the national culture and history on which such legislation has been built”.

“Whether the government likes it or not, one thing they have actually done is that they have gagged Nigerians,” said Idayat Hassan, who leads the West Africa-focused Centre for Democracy and Development.

“They have violated the right to receive and impact information,” Hassan said, adding that the Nigerian government should instead prioritise “openness and effective information flow”.

There are no official estimates of the economic cost of Twitter’s shutdown in Africa’s most populous country, but NetBlocks, which estimates the cost of internet shutdowns worldwide, said Nigeria could be losing N103.1 million (€220,600) during every hour of the blockade.

Many young people found a way around the ban by turning to virtual private network (VPN) apps.

Authorities have also set the ball rolling on regulating other social networks in the West African country. In August 2021, information minister Lai Mohammed told the government news agency that “we will not rest until we regulate social media, otherwise, nobody will survive it.”

But the government’s claim it must regulate social networks to fight fake news has been repeatedly contested by many activists.

While it is true that “the weaponisation of information to spread fake news in Nigeria is quite high, an emphasis on countering fake news just online is actually defeating the purpose because it is both online and offline in Nigeria,” said CDD director Hassan.