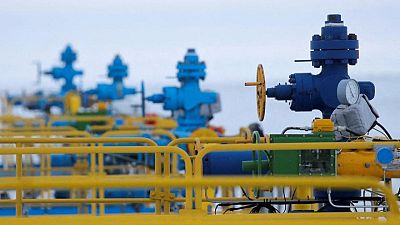 A pipeline which normally delivers gas from Siberia to Europe was sending flows from Germany to Poland on Tuesday for the 15th successive day, instead of the usual westward flow into Europe. Supplies of Russian gas from Ukraine to Slovakia were also subdued.

Russian energy exports have been in the spotlight during a broader standoff between Russia and the West, including over a Russian troop buildup near neighbouring Ukraine, which is trying to forge closer ties with NATO.

Ambassadors from the NATO military alliance and Russian officials are scheduled to meet next week as both sides seek dialogue to prevent open conflict over Ukraine.

Some European Union lawmakers have accused Russia, which supplies more than 40% of the bloc’s natural gas, of using the crisis as leverage.

They say Moscow has restricted gas flows to secure approval to start up the newly built Nord Stream 2 pipeline, which will supply gas to Germany.

Russia has denied the allegations, and says the pipeline will boost gas exports and help alleviate high prices in Europe. It has said it is meeting its contractual obligations on gas deliveries.

Moscow also denies U.S. assertions that it is planning an invasion of Ukraine, which it accuses of building up forces in the east of the country.

Gas flows via the Yamal-Europe pipeline jumped on Tuesday in the eastward direction, data from German network operator Gascade showed.

Expectations for colder weather in Europe were contributing to upward pressure on prices, but the low Russian gas flows were the main driver, a trader said.

A warning by Indonesia that its coal supply situation is critical also fuelled the European gas market rally. Indonesia has announced a ban on exports during January to avoid outages at domestic generators.

“European gas prices have rebounded, supported by the additional drop in Russian flows, concerns on a possible ban of Indonesia coal exports in January and technical buying,” analysts at Engie Energyscan said.

Analysts also said that flows of sea-borne liquefied natural gas (LNG) to Europe accelerated at the end of last year, but might recede again as Asian LNG prices are back above European spot prices, adding to bullish factors.

Europe has been at the heart of an energy crisis since last year, when the lifting of COVID-19 restrictions put huge demands on depleted stocks of natural gas.

Benchmark prices have more than quintupled since January 2021, squeezing consumers and companies and threatening the region’ economic recovery.

Russian energy company Gazprom said on Sunday it had increased its overall gas exports, including to China, last year. However, it was likely to miss its target for supplies to Europe.

The German government has declined to comment on Putin’s remarks. German gas importers have not responded to requests for comment.

With day-ahead prices around 20 euros/MWh below the month-ahead index which sets the price for Gazprom deliveries, there is an incentive to use gas in storage or to buy day-ahead, a trader said.

European gas storage were last measured at 56.3% full and remain below the five-year average despite some re-stocking between Dec. 30 and Jan. 2 when mild weather and holidays lowered demand, data from Gas Infrastructure Europe showed.

Eastbound volumes via the Yamal-Europe pipeline hit almost 9.9 million kilowatt hours (kWh/h) at the Mallnow metering point on the German-Polish border on Tuesday morning, the data showed, up from 5.8 million kWh/h previously.

Auction results showed Gazprom has not booked gas transit capacity for Tuesday for export via the pipeline.

Gazprom has also cut its daily volume of gas transit via Ukraine to Europe to about 50 million cubic metres (mcm), the lowest level since January 2020, the head of the Ukrainian gas transmission system’s operator said.

Westbound flows via Yamal-Europe are expected to restart this month.