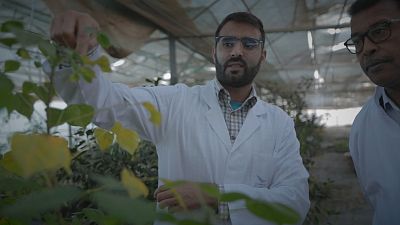 Like the rest of the world, Morocco is grappling with climate change and scientists in the country are exploring ways to develop more resilient and sustainable agriculture.

Research and development has become a top priority for many African universities. In Morocco, the Secretary General of the Mohammed VI Polytechnic University says the innovative being done should enable Africa to become a food secure continent in the future.

"The ambition of this university is to create a framework where young Africans can assimilate the concepts and notions of technology and adapt them into reality on the ground. Technology is global, but innovation is local. We want to offer a space for these young people so they can take charge of Africa’s development,”   says Secretary General Hicham el Habti.

"We are always encouraged to innovate"

The university's mantra is 'learning by doing'. An educational concept that aims to combine experience and creativity.

Yahya Ouarzazi, another student, agrees: "Our teachers, our supervisors...what we are asked to do is to innovate."

One of the University’s innovation hubs is an experimental farm. The centre specialises in so-called 'smart farming' - harnessing technology and data processing to improve cultivation.

Aerodrive Engineering Services is one of the hub's startups. It provides consulting services to farmers, using drones to detect pest insects, nutrient deficiencies or water stress.

"These techniques have proven their effectiveness in several countries, and in my opinion it is only a matter of time before such methods are essential to remain competitive at an international level," explains the firm's CEO, Soufiane Amaldi.

Much of the experimental farm's research aims to address issues affecting productivity, such as soil degradation, loss of biodiversity, and disease.

To cope with the changing climate, scientists are also testing alternative crops that grow in drylands. Plants like moringa and quinoa are especially well adapted.

"Climate change is becoming an existential threat. Therefore, it is the responsibility of every single country to come up with its own solutions to cope with this problem. One of the means [to do this] is the screening of, cereals, or crops or plants that can perform very well in the face of climate change. Quinoa is one of these plants," says soil scientist Fassil Kebede.

droughts can be significant and we chose quinoa because it only needs to be watered twice.

The University has also been playing a major role in the development of quinoa in the Moroccan province of Rhamna where the soil can be dry and of poor quality.

Some farmers have switched from wheat and barley to the Latin American grain, given it offers higher yields.

"In this region, droughts can be significant and we chose quinoa because it only needs to be watered twice, that's why we grow it here. As for the yield, we’ve carried out two very conclusive trials, and this year we are going to extend the crop to the entire plot,"  explains Anas Zeroual, an agricultural technician.

The growing popularity of quinoa in Morocco, which can be used to make flour, biscuits and couscous - Morocco’s national dish - has also led to jobs.

Hafida El Felahi, is the General Secretary of 3rd Millennium Cooperative, which processes the grain.

She says: "Many people ask for quinoa, the supermarkets too, people with gluten problems, vegetarians... There are people who have come to get quinoa from here to plant it in the north. There is already quinoa in the south... One day we will find quinoa all over Morocco. Inch'allah, we hope so!"

As for the University, it says it has big plans for the future. The ambition is to welcome thousands of new students and researchers in the coming years and become Africa’s Silicon Valley.

"We have incredible human capital. This is a core resource for the African continent. In the coming years, young people will represent the largest part of Africa’s population. For me, this is an extraordinary lever and this is the best opportunity the African continent has," insists the University's Secretary-General, Hicham el Habti.