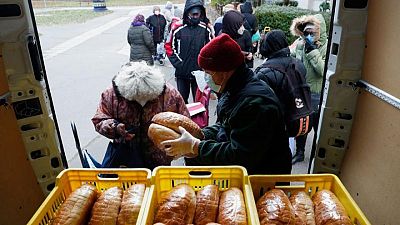 (Repeats without garble in headline, no other changes)

BUDAPEST/BUCHAREST – Matei Susnea has criss-crossed Bucharest’s frosty streets in search of a Christmas tree he can afford, but with prices of everyday items surging, he fears he and his family will have to do without this year.

Like millions of others, the 42-year-old Romanian construction worker is feeling the pinch from a rise in inflation that is gathering breadth and pace across Central and Eastern Europe, a consequence of supply-chain frictions, tight labour markets and upward pressure on wages.

On average, prices of staple goods in the region are rising at their fastest for at least a decade, up around 7% on a year ago and in some cases far more. In Romania’s capital, Christmas trees are 20% to 30% more expensive.

“One hundred lei (almost $23) is too much for me now. Finding a proper tree this year is looking less and less likely,” said father-of-two Susnea. “Prices of everything have risen very fast.”

The region’s central banks, which since June have led the way in the European Union in raising interest rates, appear confident that a debilitating price spiral can still be avoided.

But, in evidence of what economists and central bankers call second-round inflationary effects, wages are already creeping higher and employers as well as consumers are starting to adjust their behaviour.

“The official line is that many factors driving inflation are transitory, but … if inflationary patterns become entrenched, that is going to become a self-fulfilling process and I am afraid we are already in that cycle,” said Sandor Baja, general manager for staffing firm Randstad in Hungary.

“I think employers will definitely need to hike wages in the double digits on average next year. That is due to the labour market situation (too).”

In the Czech Republic, a fifth of employees are ready to switch jobs if their wages fail to rise in line with prices, a November survey by the STEM/MARK agency found. Meanwhile, more than half of industrial firms will hike prices by over 5% next year, an October business alliance survey showed.

Latest data put inflation at around 7% across the region, and at its highest in two decades in Poland, 13-year-highs in the Czech Republic and Romania and a 14-year-high in Hungary.

Central bank projections show inflation on track to average close to 6% in those four countries next year, the region’s highest average since the 2008 financial crisis.

Further rate hikes will have a dampening effect, he said, but big-spending budgets, especially in Poland and Hungary, could pile the pressure on again.

Economists say tax cuts on petrol, gas and electricity announced by the Polish government will lower the peak of inflation at the start of 2022, but a policy of cash handouts to households could lead to higher inflation later in the year.

For some Polish shoppers, the change in prices is already marked.

“It is most noticeable in one’s daily shopping. Vegetables, fruits, and other everyday produce. As for presents, people usually draw a budget beforehand,” said Warsaw resident Izabela Sarnocinska.

In Hungary – where Prime Minister Viktor Orban, facing a tight contest for re-election next year, has raised the minimum wage by nearly 20% – the central bank has acknowledged that inflation is cascading from energy and fuel prices into processed goods.

Food for Life, a charity that provides free meals to over 13,000 poor Hungarians, has been forced to slash the range of goods in its food donations to a dozen items from around 22 in previous years, skipping costlier items because prices “are sky-high”, said its head Attila Szanyi-Karl while packing donations.

Meanwhile, a Hungarian construction materials association has flagged price rises of 10% to 20% due to higher energy and transportation costs.

At a Budapest market, some say they are now spending about 100,000 forints ($310) a month, roughly two-thirds of the average pension, on food alone.

“I did not calculate exactly how much more everything costs,” said 62-year-old Zsoka, who declined to give her surname. “All I know is I can afford much less than before for the same amount of money.”