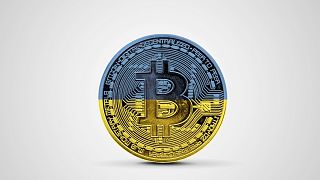 Ukraine's parliament passed a law to regulate Bitcoin and other cryptos.   -   Copyright  Canva
By Emil Filtenborg and Stefan Weichert  •  Updated: 13/12/2021

For years, cryptocurrency trading has been operating in the dark in Ukraine as no laws have defined what virtual tokens like Bitcoin are allowed to be used for. However, that is now set to change.

The Ukrainian parliament passed a law in September that will legalise and regulate the sector and restrict cryptocurrencies which will now be seen as non-monetary assets. Ultimately, it will make it possible for crypto businesses to trade and pay taxes legally.

The law - which is expected to pass again before the end of the year after being sent back to parliament for amends by President Volodymyr Zelenskyy - doesn’t allow for the use of crypto in exchange for goods and services.

Still, it will be the first step towards a crypto-inclusive future, Deputy Minister for Digital Transformation, Oleksandr Bornyakov, told Euronews Next.

"The crypto business is global, and we want to be part of this global economy. However, in order to be part of the global economy, you have to obey common rules," said Bornyakov, referring to how Ukraine will comply with anti-laundering agencies, such as the Financial Action Task Force (FATF).

I am not sure that the politicians understand the full potential of the Ukrainian crypto sector, and by passing a law, it will open the door for them to do something bad later on.

Ukrainian crypto businesses, however, have been thriving without regulation. According to an analysis done by the software company Chainalysis, Ukraine was in the top ten countries which earned the most on Bitcoin trading in 2020. It’s also home to several blockchain companies.

Bornyakov says that his ministry has had the Ukrainian companies and traders in mind while drafting the law, and he believes that the sector will benefit from it; partly because the law makes it possible for crypto businesses to open bank accounts in Ukraine, but more than anything else, because it creates trust in the Ukrainian crypto market.

"We want European Union government bodies or regulatory bodies to trust our licenses so that Ukrainian businesses will be able to attract investments, or have those people from European Union be clients of their platform or business".

If the law passes, crypto trading businesses will need to acquire a license and declare their financial activity to a regulator. Alex Momot, CEO and co-founder of the blockchain company Remme in Ukraine, sees both dangers and gains with the new legislation.

"It will be good and important for the local players in Ukraine if there will be a possibility to connect to the banking system," said Momot.

"But I also have concerns. I am not sure that the politicians understand the full potential of the Ukrainian crypto sector, and by passing a law, it will open the door for them to do something bad later on".

Momot believes that the many blockchain companies and crypto traders in Ukraine can and will quickly move to other countries, such as Portugal or Dubai, to do their business. The Ukrainian government would need to be very careful not to scare them away.

"Everybody in Ukraine does not normally want regulation from the government, because no regulation is normally better," said Momot, referring to the long history of corruption in Ukraine and what are seen as a biased judicial system.

"But on the other side, it is important to have a link to the banking sector and some simple rules, but it will hurt local players if it becomes too much".

Michael Chobanian, who is the founder of the Blockchain Association of Ukraine and Kuna, one of Eastern Europe's first crypto exchanges, told Euronews Next that the law could result in several companies leaving the country.

"I don't have so much against the law itself," said Chobanian.

"But the problem is that laws don’t really work in Ukraine. Given the general situation in Ukraine, I am afraid that once the law is passed, the crypto industry will die because of the corrupt courts, corrupt police, and problems with the tax officials.

Chobanian argues that the sector currently works pretty well on its own. Companies usually pay the low 5 per cent entrepreneur tax, and points out that people who are using cryptocurrencies to launder money can already be prosecuted under Ukrainian law.

"People already go to jail in Ukraine for money laundering, so I cannot see the need for something new," said Chobanian.

"It will be good if we can work with the banking sector, but they are not fond of crypto, so it might not change anything. I see more risks than gains".

It can, for example, help accelerate growth as alternative financing becomes available.

Bornyakov sees many opportunities for crypto business in Ukraine and believes that regulation will benefit the crypto industry in the long run in a number of ways.

First of all, Ukraine has seen increased imports and exports being bought by cryptocurrencies, making it difficult to be transparent. Secondly, unregulated crypto trading could potentially disrupt the financial system in Ukraine, he argues, and thirdly, the sector wouldn’t be able to survive if the country didn’t implement international regulations.

In Ukraine, we cannot just ignore the fact that many Ukrainians use crypto, so we need to find a way to regulate the sector and make it prosper.

"I can’t see why the law will be a danger to crypto businesses," said Bornyakov.

"It will be easy to get a license, so if you are doing everything legit and transparent, you will have nothing to fear. I have spoken to several managers and owners, and I do not believe that we will see many companies move from here".

Bornyakov also predicts that most countries will eventually develop a way to regulate cryptocurrencies and that it is better for Ukraine to move along. The hope is that the new law will create a solid legal foundation for such companies which will prevent illegal raids on crypto businesses by law enforcement, seeking out bribes.

"The fact is that you cannot stop or prevent people from trading cryptocurrencies, and if a certain number of people use it, you, as a government, will have to respond," said Bornyakov.

"In Ukraine, we cannot just ignore the fact that many Ukrainians use crypto, so we need to find a way to regulate the sector and make it prosper".

He further argues that the law will be the first step towards a future where cryptocurrencies will be used as payment for goods and services in Ukraine in the next decade or beyond.

Next year, he says, it will, for example, be possible to use a Central Bank Digital Currency, or CBDC, as a legal tender in Ukraine, and the law is needed for the sector overall.

Chobanian, in contrast, isn’t sure that this crypto-focused future will ever come.

"I am not sure that cryptocurrencies will ever be allowed to be used in shops in Ukraine. The National Bank of Ukraine said very clearly that the only legal tender is the hryvnia [the local currency in Ukraine]," said Chobanian.

"I think that the Minister and Deputy Minister of Digital Transformation are good guys and have good visions, so I am not worried about them… But Ukraine is an unstable country, so who will the next minister be?"