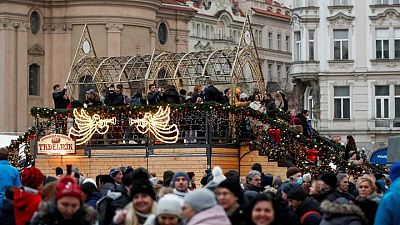 By Miroslava Krufova and Jason Hovet

PRAGUE – Most central European currencies are set to strengthen in the next year, guided by economic recovery and interest rate hikes, although the Hungarian forint and Polish zloty’s gains will be tamer than previously expected, a Reuters poll showed.

While the zloty and forint forecasts were not as high as in the previous poll a month ago, the projection for the crown was unchanged.

Central European currencies should gain ground as central banks around the region continue to tighten monetary policy to get ahead of surging inflation that is at multi-year highs.

But currencies have been hit in the past month by renewed global worries, with the emergence of a new coronavirus variant the latest to rattle investors. A strong U.S. dollar as the Federal Reserve looks to taper asset purchases is also weighing.

“We believe the Czech economy will grow much better next year than this year, and the interest rate differential will be one of the main drivers (for the crown),” Komercni Banka chief economist Jan Vejmelek said.

“On the other hand, working against all EM currencies will be the stronger dollar.”

The Czech National Bank has been the most aggressive among central European peers in hiking rates since June, including a 125 basis point rise in November that was the biggest since 1997. But the pace of tightening should slow.

In Hungary, the central bank raised its one-week deposit rate at a weekly tender on Thursday, its fifth rate rise in less than three weeks.

The poll forecast the forint to rise to 356.5 to the euro in the next 12 months, weaker than a forecast of 350.0 in the November Reuters poll.

“The (central bank’s) hawkishness and some improvement in risk sentiment in the year-end could support the HUF in the short run,” Peter Virovacz of ING said.

Volatility could drag on the forint, which lost 0.5% in the past month, before a general election next April, he added.

The zloty was expected to rise to 4.54 to the euro, versus a previous forecast of 4.46. It, too, has fallen in the past month.

The Romanian leu, a laggard in the region due to budget and political uncertainties, was forecast to ease over the next year to 4.99 to the euro, a loss of 0.9% from Wednesday’s close.