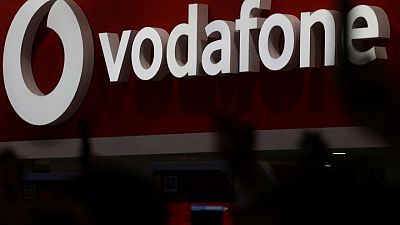 LONDON – Mobile operator Vodafone increased its free cash flow forecast on Tuesday after it reported better-than-expected growth in earnings in its first half, driven by a good performance in Germany, its largest market.

Vodafone shares, which have fallen 15% since the start of its financial year, rose as much as 6%.

The British company raised the floor of its full-year earnings guidance to 15.2 billion euros ($17.3 billion) from 15.0 billion euros, with the top remaining at 15.4 billion, and increased its free cash flow target by 100 million euros to at least 5.3 billion euros.

“Our strengthened performance in Africa and Europe puts us on track to be at the top end of our guidance for this year, as well as firmly within our medium-term financial ambitions,” he said.

Vodafone said its total revenue grew 5% to 22.5 billion euros in the six months to end-September, driven by service revenue growth in Europe and Africa and a recovery in handset sales following COVID-19 disruption in the prior year.

Organic service revenue grew in both Germany and Britain, but fell in Italy, and declined in Spain after growth in the first quarter evaporated in the second.

Read said consolidation was needed in markets such as Spain, Italy and Portugal, where “all players were suffering”.

“I definitely feel consolidating from five to four is very logical without any punitive remedies,” he told reporters, adding that the company was to that end talking to the European Commission and member states as well as Britain and countries in Africa where it operates.

He also said it was pursuing industrial merger opportunities for its Vantage Towers infrastructure spin-out, which would result in it selling down its controlling stake.

Analysts are likely to nudge up forecasts. They had expected Vodafone to report earnings of 15.2 billion euros this year and generate cash flow of 5.23 billion euros, according to a company-compiled consensus.