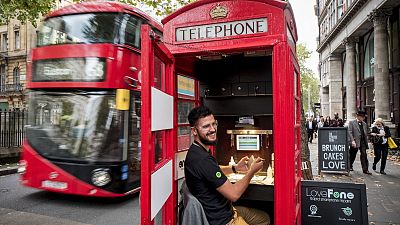 Some phone boxes have already been converted to other uses, like this one that hosts a smartphone repair shop   -   Copyright  Tolga Akmen / AFP
By Tom Bateman  •  Updated: 10/11/2021

Areas with poor mobile phone signal and those boxes that have been used more than 52 times in the last 12 months should remain, Ofcom said.

As smartphones have become the norm, the number of people using public phone boxes has fallen.

In 2002 the UK's phone boxes were used to make 800 million minutes of phone calls. By 2020, that number had fallen to seven million.

But the regulator Ofcom ruled that in some circumstances the public pay phones should stay, in a move that could prevent around 5,000 of the UK's 21,000 phone boxes from being removed by their operators.

Many of the boxes that are kept will need to be upgraded, as the UK's traditional phone network will be switched off in 2025 to make way for a transition to Internet Protocol (IP)-based calling.

Along with boxes in areas with poor mobile phone coverage and those with higher levels of use, phone boxes in "accident and suicide hotspots" should also stay, the regulator said.

"Some of the call boxes we plan to protect are used to make relatively low numbers of calls," said Ofcom’s director of connectivity Sonia Chadha.

"But if one of those calls is from a distressed child, an accident victim or someone contemplating suicide, that public phone line can be a lifeline at a time of great need."

Almost 150,000 calls to emergency services were made from public phone boxes in the UK last year, Ofcom said.

A further 25,000 were made to children's welfare charity Childline and 20,000 to a suicide support line operated by the Samaritans.

Not everyone in the UK will be happy to see the phone boxes preserved. This week a local councillor in London responded to the debate over the pay phones' future by calling for boxes in her area to be removed.

"Connectivity is important @Ofcom but these kiosks are not in a condition for my residents to use and only attract anti-social behaviour," councillor Mili Patel tweeted.

For communities that want to preserve their phone boxes, national operator BT offers an "Adopt a Kiosk" programme that sells them to organisations like local councils for £1 (€1.17).

Over 5,000 of the red boxes have been adopted since the scheme was launched, according to BT, becoming home to a range of amenities including community libraries, art galleries and defibrillators.