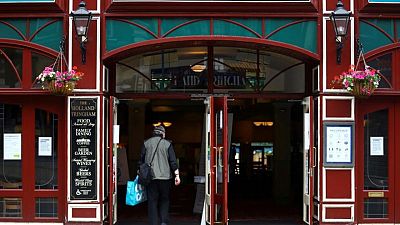 Pub chain Wetherspoon and Britain’s wider hospitality industry, which were pummelled by the COVID-19 pandemic and are now also battling staff shortages and supply woes, are navigating a long road to recovery.

“In the last 15 weeks, there has been a considerable increase in sales of the range of drinks often consumed by younger customers,” Wetherspoon said in a statement, noting cocktail sales had jumped 45%, vodka by 17% and rum 26%.

By contrast, draught drinks, more often favoured by older pub goers, have been “under pressure,” it said. Sales of traditional ales slid 30% while those of stout fell 20%.

The figures come about a month after Wetherspoon, one of Britain’s biggest pub groups which is often referred to by its younger customers simply as “Spoons”, reported a larger loss for the year ended July 25.

“A material proportion of our trade comes from older customers, some of whom have visited pubs less frequently in recent times,” Wetherspoon Chairman Tim Martin said.

While there have been no COVID-19 outbreaks among customers in Wetherspoon pubs, some had been “understandably cautious”, Martin said, adding that any improvement in trade will depend to some extent “on the outlook for the COVID-19 virus”.

Wetherspoon said trade had been positive in many cities and towns contrary to some forecasts, including its own.

Its pubs in central Liverpool, Newcastle Upon Tyne and Oxford all showed double-percentage-digit sales increases, while sales in central London slumped 17.4%.

Supply chain problems have eased in recent weeks, it said, while noting that the “busy Christmas period is yet to come”.

Staffing issues may have also eased, it said, with a “reasonable level” of job applications, while its employees had increased 14% from April to more than 42,000.