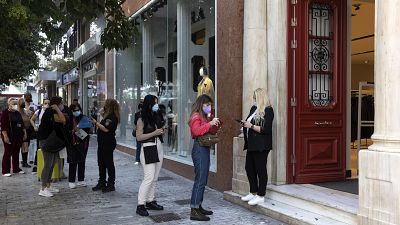 A record number of new COVID-19 infections have been registered in Greece.

On Monday, the daily tally of new cases hit 7,335 - the highest since the pandemic began.

There were also 65 deaths recorded over the same period, the highest number of fatalities in the fourth wave.

It comes after the country introduced stricter measures on November 6 to battle a rising number of infections.

The changes restrict access to cafes, restaurants, state services and banks for the unvaccinated or those without a negative coronavirus test.

'This makes me anxious'

"The situation is difficult for everyone. But it is expected if we want to live," a Greek resident told Euronews.

Those vaccinated are also being asked to present their vaccination certificates, triggering long lines outside shops and businesses.

"Personally, all this makes me anxious. Do I have my ID on me? Did I forget my green pass? When does it expire?" another resident added.

The new restrictions complicate things for business owners, who have to ensure that their customers observe the rules.

"Basically, we have become the police and we have to check everyone's documentation, but this is not our job," a cafe owner told Euronews.

"I have some unvaccinated customers. They came for coffee on Saturday and I asked them for a rapid test. Some answered, "we do not have one". They stood up and left.

"This affects my income. It has an impact on my business because if this customer was offended he might not come back."

Others, like this hairdresser, have raised the issue of the price of testing.

"We are very worried. What will happen from now on? Are people willing to take a rapid test? Because it may be difficult for some to pay this extra money (for the test) to go to the salon."

Access to places of worship, food stores, and pharmacies remains uncontrolled. For all other businesses and services, a green pass is requested.

Greeks rush to get vaccinated

More than 30,000 requests for the first dose of the COVID-19 vaccine were made on Monday, a figure that has not been reached since the summer.

It adds to the 175,000 requests made last week, although Greece's vaccination rate has stagnated for months at around 60%.

It is still unclear whether the new measures triggered the increase in requests or whether it was the record number of new cases that rallied the unvaccinated.

"I think both things have helped. The rate of vaccinations has certainly increased and this is very positive," said Greece's alternate Minister of Health Mina Gaga.

"We need to focus on two particular categories, to convince them to get the jab. On one hand, the elderly and those with health issues, and on the other hand, the pregnant. It is devastating to lose young women who are pregnant," she added.

Many experts insist that the pressure on the health system will only stop if the elderly are vaccinated.

According to ECDC data, 75% of elderly people in Greece have received their first shots, but 100% of citizens over the age of 80 in several European countries have already received both doses.