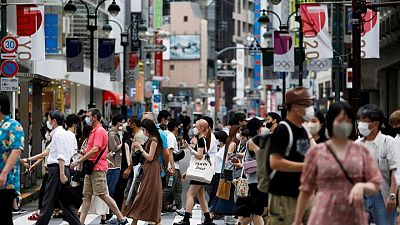 TOKYO – Japan’s services sector activity grew for the first time in 21 months in October as consumer sentiment picked up after the coronavirus pandemic subsided, giving a broad-based boost to demand.

The government in September ended state of emergency curbs imposed to contain the health crisis, as new cases and deaths came down rapidly that month and the burden on the medical system eased.

“Firms continued to build capacity in anticipation of a gradual recovery in demand, despite the rate of job creation easing to a three-month low.”

That meant services sector activity stayed above the 50.0 threshold that separates contraction from expansion for the first time since January 2020, before the economy went through its deep COVID-19 slump.

The 20 months of decline was the longest such streak since a 27-month run through March 2010, during the global financial crisis.

Some economists hope a stronger recovery in service sector sentiment will offset a slowdown in output and exports, which are being hit by a persistent global chip and parts supply shortage.

The PMI survey showed the services sector saw the biggest jump in input prices since November 2019, while new and outstanding business remained in contraction despite the expansion in overall business activity.

The composite PMI, which is calculated using both manufacturing and services, expanded for the first time in six months, rising to 50.7 from September’s final of 47.9.