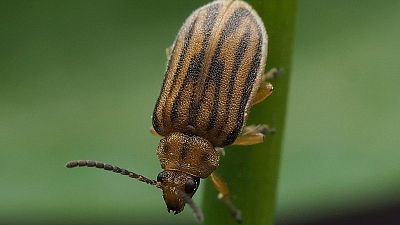 It might not look like much but this small brown insect could help millions of people suffering from allergies in Europe.

To understand its potential you need to know a bit about what it eats.

Its food of choice is common ragweed, an invasive and highly allergenic plant native to North America which has been spreading across Europe since its accidental arrival during the Second World War.

Common ragweed allergy: what you need to know

Ragweed, which goes by the scientific name Ambrosia artemisiifolia, causes allergic reactions between mid-August and late September. Like many other pollen it provokes sneezing, blocked nose and conjunctivitis. What’s particularly noteworthy about ragweed is the tiny number of pollen grains needed to cause an allergic reaction.

“Not all pollen are equal,” said Margaux Sanchez, scientist and expertise coordinator at the French Agency for Food, Environmental and Occupational Health & Safety (ANSES).

“Some pollen are more allergenic, more powerful. With ambrosia pollen, only six grains per cubic metre are enough to provoke symptoms in allergic people,” she told Euronews Next.

According to a 2020 ANSES report, a single ragweed plant can produce between 100 million and 3 billion pollen grains during the season and its pollen can travel hundreds of kilometres.

To give an idea of the scale of the problem, ANSES estimated the medical costs caused by this weed in France is at €59-€186 million annually. That cost soared to €415-650 million per year when they took into account production losses from work absences and loss of quality of life.

Ragweed doesn’t just have a negative impact on health. Although it grows in all sorts of habitats, from riverbanks and roadsides to construction sites, it particularly thrives among agricultural crops like sunflower and maize where it can cause huge yield losses when it mixes up in the harvested crops. Its seeds can even stay in the soil for up to 10 years, so once ragweed has infested a field, it can reduce the land’s value.

Ragweed is not a European problem. It has also colonised other countries, China and Australia in particular. So these countries started looking for a ‘biological control agent’ that could help manage the plant. This entails finding an insect or plant disease, to control a pest species, without risk to native plants and animals.

“Usually an organism doesn’t pose a problem in its native habitat because it’s controlled by a range of natural enemies… There’s a type of balance that’s created. In the invaded areas, this balance doesn’t exist because those key enemies, such as predators, are missing,” he told Euronews Next.

“In the invaded areas, this balance doesn’t exist as key natural enemies (e.g. predators) are missing.”

After years of experiments, these countries discovered Ophraella Communa, a beetle native to the Americas that spends most of its life hanging out, eating and laying its eggs on common ragweed. China has now been using it as a control agent for ten years.

"For several years China released millions of them every year in the infested zones,” added Dr Desneux.

“Since they put that biological control programme in place, the beetle established itself successfully and they don’t have a ragweed problem anymore.”

Other countries, especially European ones, did not prioritise Ophraella Communa as a method of controlling ragweed.

However, the beetle ended up appearing, uninvited, in the Milan region of Italy in 2013, an area severely infested with ragweed. The arrival had a major impact: ragweed pollen concentration levels plummeted by 80% in just a couple of years.

European scientists have used the unintentional Italian situation as an additional opportunity to study the insect.

“In a 2016 report we evaluated the risks and potential benefits of introducing the insect in France,” said Dr. Desneux.

“We found that the risks were pretty much zero, very minimal, but the potential benefits were very high… we estimate it would reduce the medical costs in France by half, at a minimum.”

Could it harm crops?

One of the main concerns that has slowed progress is the fear that Ophraella Communa could attack sunflower crops. But recent research carried out through a European-funded project, called Cost-Smarter, has concluded there is virtually zero risk to crops. The experience in China backs this up, with no recorded attacks on sunflower crops since its introduction.

So in the summer of 2021, the first tests of Ophraella Communa began in France.

“We have received the authorisation from ANSES to bring Ophraella Communa to France in a quarantine situation,” Dr Desneux explained.

“We will do more tests to complete the data around its harmlessness for French plants… if the risks are low, or non-existent, then we will ask ANSES for the right to release the insect as a biological control agent against common ragweed.”

A normal project to introduce a biological control agent can take up to 10 years, but Dr Desneux is optimistic this one will move quickly.

Climate change and the future of ragweed allergies

There are high expectations on the insect’s tiny shoulders because if ragweed is left uncontrolled many more people could become allergic over the coming decades.

“Future modelling is not very optimistic,” said Sanchez, referring to the way ragweed will propagate if left alone.

“The main factor will be climate change because ambrosia likes higher temperatures... So with climate change, the plant will expand to new areas because the habitat will be good for it and the C02 will also have an impact on the pollen, on the production of the pollen.

“Climate change will also make the seasons longer. So this all means more pollen, for longer. So for people it will have a huge impact.”

How to prevent and treat a ragweed allergy

If you are not already allergic to ragweed you may be one of the lucky ones, or it may just be that you haven’t been in prolonged contact with it yet. A person needs to be exposed to a strong concentration of pollen to develop the allergy, so it’s in your interest to keep it out of your area.

If ragweed can be kept out, or strongly limited, in currently unaffected European regions, there is the possibility of preventing the allergy in millions of people.

If, however, you are already allergic to ragweed then it’s not too late to be hopeful. If all goes well with the experiments of Ophraella Communa in France, it may one day be introduced by other countries and your summers could get a whole lot easier.

“I can’t say you’ll never be allergic again, that you’ll never have symptoms,” concluded Dr Desneux. “But there will be a real impact, a real reduction of symptoms.”

While we wait to see whether a small brown beetle can help control this plant and relieve allergy symptoms, here are a few things you can do:

If you are already allergic here’s what you can do during peak periods: