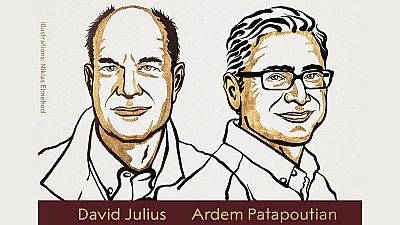 The Nobel Prize in Physiology or Medicine has been awarded to David Julius and Ardem Patapoutian for their discoveries on how the nervous system transmits temperature and touch.

Their "groundbreaking discoveries" have "led to an understanding of how heat, cold and mechanical force can initiate the nerve impulses that allow us to perceive and adapt to the world," the Nobel jury in Stockholm praised.

Their work is being used in research for many treatments, including chronic pain.

David Julius, 65, a professor at the University of California, used capsaicin, a pungent, active component from chilli peppers that causes a burning sensation, to identify a sensor in the nerve endings of the skin that responds to heat.

Ardem Patapoutian, a 12-year-old Beirut-born professor at the Scripps Research Institute, also in California, used pressure-sensitive cells to discover a new class of sensors that respond to mechanical stimuli in the skin and internal organs.

"They are both incredible researchers who have opened the doors to sensory sensation in a totally unique way," Thomas Perlmann, head of the Nobel Committee for Medicine.

"These breakthrough discoveries launched intense research activities leading to a rapid increase in our understanding of how the nervous system senses heat, cold, and mechanical stimuli," the Nobel jury said in a statement.

"The laureates identified critical missing links in our understanding of the complex interplay between our senses and the environment," it added.

With this 112th Nobel Prize in medicine, there are now 224 winners of the "physiology or medicine" prize since its creation, including only 12 women.

Last year's Nobel medicine prize went to three scientists who discovered the liver-ravaging hepatitis C virus, a breakthrough that led to cures for the deadly disease and tests to keep the scourge from spreading through blood banks.

The prestigious award comes with a gold medal and 10 million Swedish kronor (about €1 million). The prize money comes from a bequest left by the prize's creator, Swedish inventor Alfred Nobel, who died in 1895.

The prize is the first to be awarded this year. The other prizes will be awarded throughout the week with the outstanding work in the fields of physics recognised on Tuesday, chemistry on Wednesday before the much-anticipated literature prize on Thursday and the peace prize on Friday - the only prize awarded in Oslo.

The prize for economics closes the award season next Monday.

While the 2021 Nobel Prizes are announced as planned this week, the ongoing COVID-19 pandemic has led to the cancellation of the laureates' arrival for the second year in a row for the award ceremony on 10 December in Stockholm, the first time this has happened in peacetime since 1924.

As with last year's awards, the prizes will be awarded in the winners' countries of residence, although there is some hope the peace prize will still take place in Oslo.

For the latter, freedom of the press (Reporters Without Borders, Committee to Protect Journalists, and so on), the Belarusian opposition and its leader Svetlana Tikhanovskaya, and 18-year-old Swedish climate activist Greta Thunberg and her Fridays for Future movement, are being considered as candidates to succeed the World Food Programme.

COVID pill 'cuts risk of death or hospitalisation by half,' says Merck