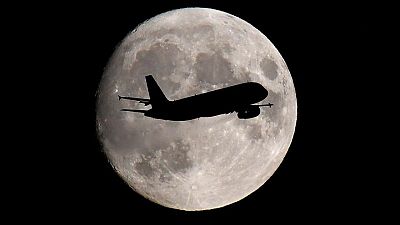 By Allison Lampert and Tim Hepher

– U.S. aerospace manufacturers are poised to strengthen a climate target by pledging to reach net-zero emissions by 2050, echoing a commitment to be discussed by global airlines on Monday, according to industry sources and a document seen by Reuters.

The U.S. Aerospace Industries Association will commit on Monday to work with airlines and governments to achieve the target, joining a growing aviation industry consensus that also includes airports, according to the sources.

Global airlines are expected to vote on a similar proposal at the annual meeting of the International Air Transport Association in Boston on Monday.

A broader aviation industry lobby, the Air Transport Action Group, is also expected to sign up later this week.

The target replaces a previous goal of halving net emissions by 2050 from 2005 levels, which was intended to mirror the Paris climate agreement to limit global temperature increases this century to 2 degrees Celsius above pre-industrial levels.

A U.N. report this year said there was now a 40% chance that global temperatures would temporarily reach 1.5 degrees Celsius above pre-industrial levels in the next five years.

Environmental groups say the emerging net-zero 2050 target does not go far enough and must be enforced by government action. Aviation accounts for some 3% of global emissions.

European planemaker Airbus has already said it would back the 2050 target.

Boeing referred questions on the goal to AIA and ATAG.

To help meet the new target, manufacturers have pledged to expand their investments in a new generation of technology for more efficient planes, such as hybrid jet engines expected to enter service during the next decade, the sources said.

Airlines, airports and aerospace manufacturers are pressing for government support for increasing production of sustainable aviation fuel (SAF) needed to reach the targets.