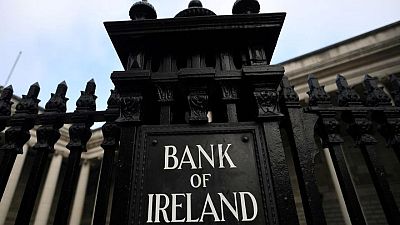 DUBLIN – Bank of Ireland blamed state-imposed curbs on bankers pay and bonuses for the announcement on Monday that Chief Financial Officer Myles O’Grady would leave the bank and join Irish food group Musgrave.

Ireland capped executive pay at 500,000 euros ($552,300) a year during the euro zone’s costliest banking rescue more than a decade ago. It banned all forms of variable pay and fringe benefits for even junior bank staff, restrictions lenders complain impedes them in attracting and retaining talent.

Bank of Ireland Chief Executive Francesca McDonagh said on Monday this had left the country’s largest bank by assets at a competitive disadvantage to other companies and fellow members of the stock exchange which are not restricted in the same way.

“Myles’ decision to leave the Irish banking sector highlights the challenge that remuneration restrictions represent for Irish banks in attracting and retaining talent,” McDonagh said in a statement.

“The normalisation of our operations is now vital to the long-term sustainability of the indigenous banking sector,” she said.

O’Grady will remain in his position until he joins Musgrave in April 2022, the food retail, wholesale and foodservice company said in a statement. Musgrave owns the country’s largest supermaket chain, SuperValu.

In 2018, former Allied Irish Banks Chairman Richard Pym described Ireland’s banks as a training ground for rivals after his bank lost its chief executive and chief financial officer within weeks.

The Irish government, which pumped 64 billion euros or almost 40% of annual economic output into its banks following the 2008 global financial crisis, has said it has no plans to ease the restrictions.

It still retains a majority stake in AIB and permanent tsb and is selling down its 12% holding in Bank of Ireland.