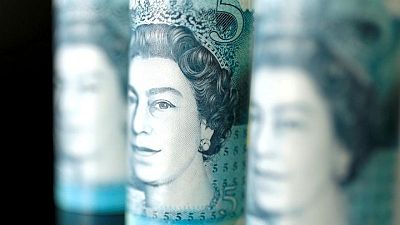 LONDON -Sterling steadied in afternoon trading on Monday after hitting a one-week high against the dollar on Friday as investors waited for more data to assess the pace of the post-lockdown economic recovery and how soon interest rates could he hiked.

The direction of travel drifted during the session with the British currency briefly dipping below $1.38 then making timid gains against the greenback.

It hit its highest in over three weeks against the bloc’s currency around midday at 0.8508 pence, a level unseen since Aug. 19.

Figures on July jobs are scheduled for Tuesday while inflation and retail sales data will be published on Wednesday and Friday respectively.

The Bank of England expects inflation to rise sharply this year and hit a peak of 4%.

A strong reading for inflation would reinforce expectations that the Bank of England (BoE) is set to tighten its monetary policy quicker than the European Central Bank or the U.S. Federal Reserve.

A Reuters poll found that investors believed the BoE will raise borrowing costs by the end of 2022.

Currently money markets see a 57% probability of a 15-basis-point hike in February, while the Federal Reserve is forecast not to raise rates until at least 2023

Comments by Bank of England Governor Andrew Bailey sent the pound upwards last week when he said he was among those who thought the minimum conditions had been reached to consider an interest rate hike.

The announcement of a UK tax hike to fund health spending and social care had weighed on the pound earlier as it could theoretically ease pressure on the BoE to tighten monetary policy as it might slow down the recovery.

Investors are also now looking out for signs that more fiscal tightening could be on the way from Boris Johnson’s government.

“Having successfully pushed through his plans for a national insurance increase last week (effective next April), the domestic focus is on the political backlash to such tax increases – and also whether any other tax increases will emerge in the Chancellor’s autumn statement in October”, ING analysts also wrote.

According to weekly futures data, speculators increased their net short position on the pound in the week to Sept. 7, showing the speculative market is the most bearish on the pound versus the dollar since July 2020.