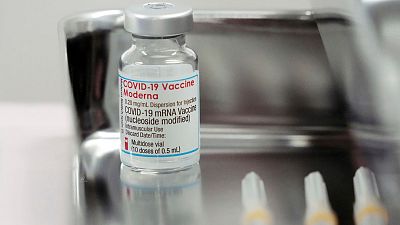 Japan has reported another instance of contamination in a batch of Moderna COVID-19 vaccines imported from Spain.

A pharmacist had reported several black particles in one vial of the vaccine in Kanagawa, south of Tokyo.

The discovery comes just one week after Japan's government decided to block more than 1.6 million doses of Moderna vaccines over contamination fears.

Moderna confirmed on Wednesday that "steel particles" had been found in some vaccine vials.

But the anomaly does not present a health risk, according to a joint statement by the pharmaceutical company and Takeda, the Japanese distributor of the vaccines.

Takeda says that the traces are believed to have come from "a device in the production line" and "do not pose an undue risk from a medical point of view".

Rovi, a Spanish company that produces and packages the vaccine for the Japanese market, has also taken part in the investigation.

According to the statement, it is "most likely" that the steel particles occurred during a technical failure in the production line that affected three batches of Moderna vaccines.

Moderna and Takeda added that if small steel particles were injected into a muscle, "a local reaction may occur, but is unlikely to result in other adverse reactions".

Japanese authorities are also investigating the deaths of two people who were vaccinated with one of the three batches before they were recalled.

Takeda and Moderna said there was "no evidence" at this stage that the deaths could have been caused by the vaccines, but stressed the importance of a formal investigation into the matter.

Japan has relied entirely on foreign-developed vaccines produced by Moderna, Pfizer and AstraZeneca to innoculate its population against the coronavirus.