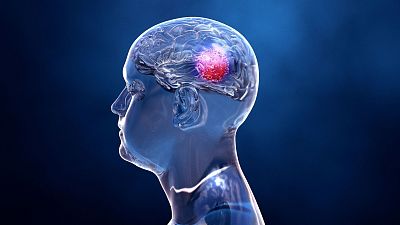 A lab in the University of Tel Aviv is 3D-printing brain tumours in order to trial new treatments for Glioblastoma, an agressive form of brain cancer.   -   Copyright  Canva
By Aisling Ní Chúláin  & AP  •  Updated: 20/08/2021

In the past few years, we’ve seen 3D printing technology used to make everything from houses and bridges to prosthetic limbs and organs.

But one might reasonably wonder why on Earth someone would want to print a deadly Glioblastoma tumour in a lab.

It’s all part of a new project at the University of Tel Aviv which is hoping to accelerate the search for new drugs and therapies to treat the aggressive cancer.

Scientists are better able to mimic the growth rate and behaviour of each individual tumour by printing a faithful replica using cell samples from patients suffering from the disease.

As opposed to testing drugs on cells in a Petri dish, this method will help them track how the tumour responds to treatment in an environment that replicates how cells behave in our bodies.

“What we created was a 3D printed glioblastoma cancer model that has in it different cell types,”

Professor Ronit Satchi-Fainaro, the study leader at the Sackler School of Medicine in Tel Aviv, explained.

For the past five years, Satchi-Fainaro has been using 3D bioprinters to test the success of different types of drugs and therapies against cancer.

She believes 3D models properly reflect the elasticity and composition of the brain, meaning in theory, results from tests carried out on these models should closely reflect those from clinical trials.

''So the ground breaking news: we found that the inhibition of a small molecule showed similar results in our 3D model and also in patients,” Lena Neunfeild, a chemical engineer who works in Satchi-Faniaro's laboratory, said.

“However, when the cells were grown on 2D cultures, on Petri dishes we didn't have any effect, emphasising the strength of our platform to predict the clinical scenario”.

Professor Satchi-Fainaro’s team will soon be commencing an open label trial. This means they will know the identity of the patient and will be able to compare lab results directly with the patient's outcome.

We have no plans to return the cancer tissue to any patient of course, but to use it for exploiting and understanding mechanisms that will lead to new targets and new drugs, and also to screen for personalized therapy, to fit the therapies to the patient.

Crucially, they’ll be able to see if testing drugs on the 3D printed tumour accurately predicts how the cancer responds to a drug in the patient’s body.

While the possibility remains that the results won’t match, the lab is optimistic about a positive outcome given the research they’ve carried out to date.

''This is one of the hottest areas in research, in cancer research, also in organ replacement. It is the same rationale.The only difference is the one recreating organs needs to return it into the body,” said Satchi Fainaro.

“We have no plans to return the cancer tissue to any patient of course, but to use it for exploiting and understanding mechanisms that will lead to new targets and new drugs, and also to screen for personalized therapy, to fit the therapies to the patient'.'