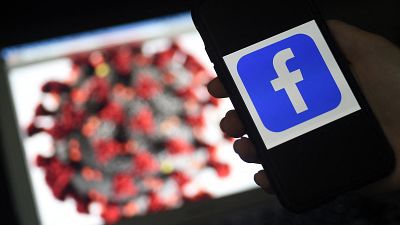 Hundreds of Facebook acocunts were engaged in a coordinated campaign to spread falsehoods about two COVID-19 vaccines, the company said   -   Copyright  OLIVIER DOULIERY/AFP
By Euronews and AFP  •  Updated: 11/08/2021

Facebook has taken down hundreds of fake accounts that formed part of a Russia-based disinformation operation seeking to discredit the AstraZeneca and Pfizer/BioNTech Covid-19 vaccines.

A network of 65 Facebook and 243 Instagram accounts responsible for spreading misleading information about the jabs was traced to Fazze, a subsidiary of a UK-registered communications firm that mainly operated in Russia.

Using fake profiles and occasionally influencers, the content was spread as widely as possible on various platforms, including Reddit, Medium and Change.org.

One falsehood spread by the campaign was that the AstraZeneca jab was "turning vaccine recipients into chimpanzees".

"This campaign was working like a laundromat," the social networking giant said, noting in its report on the operation that the Instagram portion of the disinformation effort was "crude and spammy".

The campaign came to light in May when several French and German influencers active in the fields of health and science spoke out about offers they had received to publicly criticise the Pfizer vaccine in return for payment.

"Unbelievable. The address of the London agency that contacted me is bogus. They never had premises there, it's a cosmetic laser centre! All the employees have weird LinkedIn profiles... which disappeared this morning. Everyone worked in Russia before," Léo Grasset, a science YouTuber with over a million subscribers, said on Twitter.

Along with deleting the accounts involved, the Fazze agency is now banned from the platform, Facebook said.

"It was a sloppy campaign, but the process was sophisticated," said Nathaniel Gleicher, Facebook's director of security policy.

"There was spam, influencers, document hacking... So, it's harder for one platform to catch this kind of campaign in its entirety," he added, calling on all civil society - including academics and journalists - to mobilise alongside the networks on the front line".

Last month, US President Joe Biden said Facebook and other social media platforms were "killing" people by spreading false information about COVID-19 vaccinations. Biden was subsequently forced to U-turn on his comments.

"Facebook does not kill people," he said, clarifying that he had been referring to the disinformation spread by some social media users which could "harm those who listen to them" and ultimately "kill people".

COVID-19 is a vascular disease not a respiratory one, says study