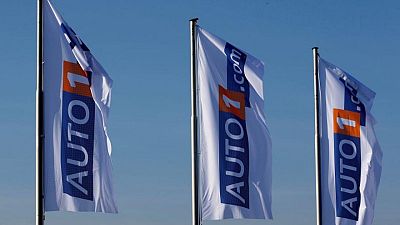 The company’s results prompted a revenue upgrade, though its margin guidance was trimmed slightly, reflecting AUTO1‘s drive to invest in growth as more people buy cars online rather than visiting dealers and going for a test drive.

AUTO1, which listed in Frankfurt in February, raised its full-year revenue guidance to between 4 billion and 4.4 billion euros – up 200 million euros from its previous view. Its adjusted EBITDA margin is now expected to be slightly lower at between -2.5% and -3%.

Second-quarter revenue grew by 164% year on year and by 18% from the previous quarter as markets bounced back from lockdowns imposed across AUTO1‘s European markets in the early stages of the COVID-19 pandemic.

Gross profit, a measure of the money made on car deals, rose 15% quarter on quarter to 99 million euros – the highest in the Berlin-based company’s nine-year history. Even so, AUTO1‘s Frankfurt-listed shares were down 3% by 0820 GMT.

AUTO1 offers a platform for merchants to trade used cars in 30 European countries but it is focusing on expanding Autohero, its direct-to-consumer business. Autohero sold 8,400 cars in the quarter – a sevenfold increase from a year earlier.

AUTO1 will invest in increasing capacity to deliver direct to buyers, Bertermann said, adding that it would build out its refurbishment centres to ready 150,000-200,000 cars a year for Autohero.

A number of rivals, including Dutch-based CarNext, have announced bold plans to expand in Europe’s online market for used cars, but for now AUTO1 says they do not pose a direct challenge.