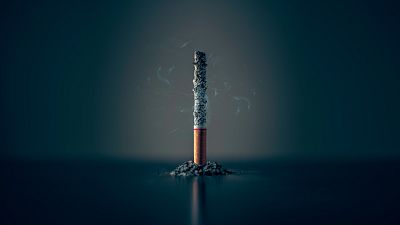 Tobacco company Philip Morris International says it could stop selling cigarettes in the United Kingdom within the next ten years.

"I think in the UK, ten years from now maximum, you can completely solve the problem of smoking," PMI boss Jacek Olczak told Britain's Mail on Sunday newspaper.

When the paper asked Olczak if that meant Philip Morris would stop selling cigarettes within that time frame, he responded "absolutely".

Olczak also said the company's Marlboro brand would disappear from British shops, and has previously said he would like the company to halt cigarette sales in Japan in the coming decade.

Shifting away from traditional tobacco

Philip Morris International – a subsidiary of Philip Morris owner Altria – has said it aims to become a majority smoke-free company by 2025.

In recent years the company has moved away from traditional cigarettes, investing in alternatives like e-cigarettes.

Earlier this month, Philip Morris took the controversial step of bidding for British medical company Vectura, which specialises in inhalers and treatments for respiratory illnesses.

The move sparked condemnation from UK charities including Action on Smoking and Health (ASH) and Cancer Research UK.

In a letter to UK Business Secretary Kwasi Kwarteng, the charities' chief executives called on the government to block the takeover, saying they were "deeply disturbed" by the proposals.

The UK has been active in its attempts to cut the nation's smoking habit. It was one of the first countries to ban smoking in public places in 2007, and introduced plain packaging for cigarettes in 2016.

A white paper published by the UK's Department of Health and Social Care set out the "ambition" for England to go "smoke-free" by 2030.

"This includes an ultimatum for industry to make smoked tobacco obsolete by 2030, with smokers quitting or moving to reduced-risk products like e-cigarettes," the paper said.

What does the EU say?

The European Union has also made moves to curb tobacco use, which it says is linked to 27 per cent of all cancers in the bloc.

In February, the European Commission unveiled its so-called "Beating Cancer Plan", a set of proposals backed by a budget of €4 billion which include a goal to cut the number of European smokers to five per cent of EU citizens by 2040.

Figures from the Commission show the current EU average is 26 per cent, rising to 29 per cent among those aged 15-24.

Denmark proposes ban on selling cigarettes to people born after 2010

Did lockdown cut heart attacks by a third?