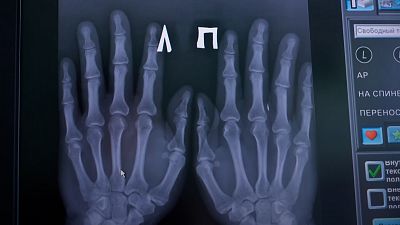 A photo of an X-ray of the electronic chips Russian doctor Aleksandr Volchek has implanted into his hands and wrist,   -   Copyright  AP Photo
By Aisling Ní Chúláin  & AP  •  Updated: 16/07/2021

For those among us prone to losing keys, wallets, bank cards, and so on, never having to keep these essentials on your person might seem like an impossibility.

But one Russian doctor from the Siberian city of Novosibirsk has quite literally taken solving this problem into his own hands by injecting tiny chips into his fingers and wrists to replace some of these essential items.

One of the chips in his hands functions as a key to the intercom system in the hospital where he works, another his work pass, and the third functions as his ATM card. He also has one in his wrist which can store contact details and copy them over to his mobile phone.

The design, containing a ferrite core and a very small chip, is encased in a small, biologically inert glass tube which is then injected under the skin using a large syringe with a thick needle.

The chips can be easily removed if needed.

"In order to get to work, you need to take out your purse, take a card out of it, apply it, put it back, not lose it, it is very important because my wife got her chip after she lost four cards," obstetrician-gynaecologist Aleksandr Volchek said.

"Instead of this, with a well-worked out movement, just put your hand to the reader, you don't notice the infrastructure around you. It makes your life a lot easier".

There are no other things in it apart from identification and getting some pleasure out of it, because medical implanted devices have not yet reached the level of miniaturization and the level of energy consumption that would be desired in order to be used in general practice.

Although still enthusiastic about his own life choice, Volchek is not blind to the obstacles preventing "chipped" humans becoming the norm.

"There are no other things in it apart from identification and getting some pleasure out of it," he explained.

"Medical implanted devices have not yet reached the level of miniaturisation and the level of energy consumption that would be desired in order to be used in general practice".