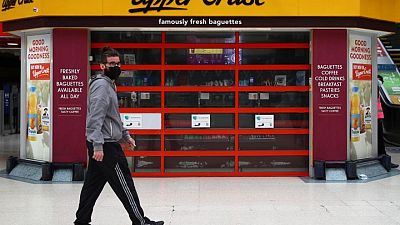 – Upper Crust owner SSP said on Wednesday a recovery in its airport and railway station snack food outlets had begun, after a 182 million pound ($258 million) first half loss.

Shares in SSP, which have been hammered by the halt in commuting and air travel during the COVID-19 pandemic, were trading 0.5% lower at 0850 GMT, recovering from earlier losses.

SSP, which operates in 35 countries, has racked up more than 600 million pounds in losses since the start of the coronavirus crisis and raised 450 million pounds in a rights issue in April in order to see itself through the crisis.

But its chief executive Simon Smith said there were signs of a bounceback as Europe eased lockdown restrictions, although London-based SSP warned that it does not expect like-for-like revenue to return to “around pre-COVID levels” until 2024.

“The recovery in domestic and leisure travel has now begun in a number of our territories, and our teams are busy re-opening units in line with passenger demand,” Smith said.

Like other travel and hospitality firms, SSP was badly hit by the pandemic through 2020, shutting about 2,500 outlets and furloughing more than 22,000 staff at the peak of the crisis.

After more than a year in the doldrums, however, demand for air and rail travel is expected to increase in the months ahead, particularly in the leisure segment, as vaccinations gain pace and countries ease restrictions for inoculated travellers.

Although Smith said there were signs of improvement, SSP said that while the report of its auditors on its last full-year results was unqualified, it contained a warning of “a material uncertainty that may cast significant doubt on the Group’s and its parent company’s ability to continue as a going concern.”

JPMorgan analysts, who have an “overweight” rating on SSP, said it is in a “much better place” having extended bank debt maturities and waivers to 2024.