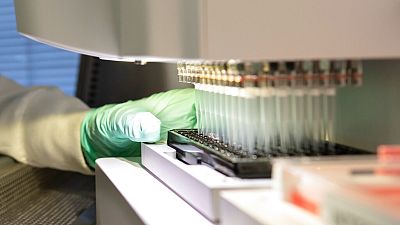 In this 2019 photo provided by Biogen, a researcher works on the development of the medication aducanumab in Cambridge, Massachusetts.   -   Copyright  Biogen via AP
By Euronews  with AP  •  Updated: 08/06/2021

The US Food and Drug Administration (FDA) has approved a new drug for Alzheimer's disease that's being hailed as a breakthrough, but whose effectiveness is disputed.

The drug, aducanumab, will be sold under the brand name Aduhelm and is to be given as an infusion every four weeks.

The first Alzheimer's drug to be approved in nearly 20 years, aducanumab is the only therapy said to treat the underlying disease, rather than manage symptoms like anxiety and insomnia. However, the drug did not manage to reverse mental decline, only slowing it in one study. Patients taking it saw their thinking skills decline 2 per cent more slowly than patients taking a placebo.

The FDA's green light could impact millions of Americans and their families, but it's proving controversial within the medical world. On the one hand, groups representing Alzheimer's patients and their families say any new therapy -- even one of small benefit -- warrants approval. On the other hand, many experts warn that greenlighting the drug could set a dangerous precedent, opening the door to treatments of questionable benefit.

"The FDA gets the respect that it does because it has regulatory standards that are based on firm evidence. In this case, I think they gave the product a pass,'' said Dr Caleb Alexander, a medical researcher at Johns Hopkins University, who's also an FDA adviser and who recommended against the drug's approval.

The FDA's top drug regulator acknowledged that "residual uncertainties" surround the medication, but said Aduhelm's ability to reduce harmful clumps of plaque in the brain is expected to help slow dementia.

"The data supports patients and caregivers having the choice to use this drug," Dr Patrizia Cavazzoni told reporters. She said the FDA carefully weighed the input of people living with the "devastating, debilitating and deadly disease".

Under terms of the so-called accelerated approval, the FDA is requiring Biogen to conduct a follow-up study to confirm benefits for patients. If the study fails to show effectiveness, the FDA could pull the drug from the market, though the agency rarely does so.

The drug's potential side effects will also be closely monitored. The drug carries a warning about temporary brain swelling that can sometimes cause headaches, confusion and dizziness. Other side effects included allergic reactions, diarrhoea and disorientation.

Some 6 million people in the US and many more worldwide have Alzheimer's, which gradually attacks areas of the brain needed for memory, reasoning, communication and basic daily tasks. The global burden of the disease, the most common cause of dementia, is only expected to grow as millions more baby boomers progress further into their 60s and 70s.