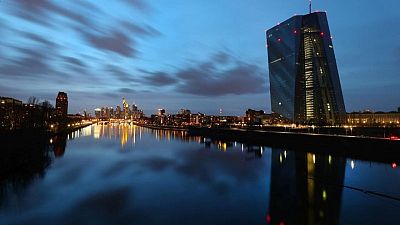 LONDON – The European Central Bank meets on Thursday and will review the pace of emergency bond buys that it jacked up in March to prevent a rise in borrowing costs hurting a recovery.

Dovish rhetoric from policymakers suggests no hurry to slow the pace of buying under the 1.85 trillion euro ($2.24 trillion) Pandemic Emergency Purchase Programme (PEPP).

Yet, with the economy on a sounder footing, inflation picking up and other central banks taking tentative steps to slow stimulus, pressure to taper is building.

Here are some key questions on the radar for markets.

1. Will the ECB slow the emergency bond buying pace?

Most analysts expect the ECB to maintain a higher pace of buying in the third quarter given recent dovish commentary — board member Fabio Panetta wants the current tempo of asset purchases maintained.

But it could stress flexibility over purchases depending on market conditions and seasonal factors, which markets may interpret as a sign that buying could slow in August when supply of government bonds typically falls.

Others don’t rule out a modest slowdown in purchases given an economic recovery.

BNP Paribas chief global economist Luigi Speranza said he expected a “dovish tapering” that could pave the way for a moderate slowdown in the pace of bond buying.

2. Will the ECB discuss the overall size of the PEPP envelope?

The PEPP will run until end-March and the ECB has said it doesn’t need to use the full 1.85 trillion euro “envelope.”

With the economy strengthening, the hawks on the Governing Council could make their case for not using the full envelope, so ECB chief Christine Lagarde may be asked if this was debated.

3. Could the ECB discuss moving away from emergency tools?

While starting actual tapering is unlikely, so too will Lagarde likely steer clear of any comments that suggest a debate on tapering is even underway. She may push back such talk until after the ECB’s strategy review in September.

Central banks globally are looking to dial back emergency stimulus and Lagarde could be pressed on how she sees the transition from the emergency PEPP to the less flexible Asset Purchase Programme (APP) next year.

“The debate will be how you transition between the PEPP and the APP and whether they need to pump up the APP temporarily, most likely…and that’s a complex discussion to have,” said Nordea Asset Management senior macro strategist Sébastien Galy.

Graphic: From Pepp to APP : https://fingfx.thomsonreuters.com/gfx/mkt/xegvbrmexvq/ECB5.JPG

4. Where does the ECB stand on inflation?

Euro zone inflation surged past its elusive near 2% target in May, presenting a communication challenge for policymakers happy to live with higher prices for now.

Officials believe market talk of rapidly rising prices is misplaced. While the ECB is likely to revise up near-term inflation forecasts, its long-term estimates should show price pressures remain subdued.

GDP forecasts will also be watched since they will be the first to reflect spillover effects from U.S. President Joe Biden’s fiscal stimulus.

5. Is the ECB worried about bond yields and the euro?

Strategists expect the upward push in borrowing costs to return, a move that shouldn’t cause alarm if accompanied by strong economic data.

March ECB minutes flagged concern about euro strength. It has firmed 1.6% versus the dollar since the March meeting but current levels shouldn’t cause policymakers too much worry.