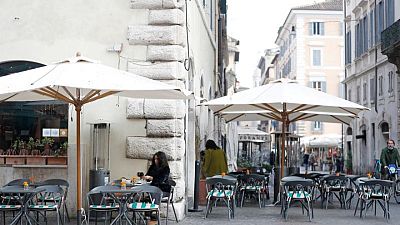 <div> <p>By Jonathan Cable</p> <p><span class="caps">LONDON</span> – Euro zone business activity surged in May as the easing of some coronavirus related restrictions injected life into the bloc’s dominant services industry, a survey showed, echoing data on Tuesday which showed factories had their best month on record.</p> <p>An acceleration of vaccine programmes across the region and a fall in reported daily cases has allowed governments to remove some measures imposed to stop the spread of the virus.</p> <p>That meant <span class="caps">IHS</span> Markit’s final composite Purchasing Managers’ Index (<span class="caps">PMI</span>), seen as a good gauge of economic health, jumped to 57.1 last month from April’s 53.8, its highest level since February 2018. </p> <p>May’s final reading was ahead of a preliminary 56.9 indication and comfortably above the 50 mark separating growth from contraction.</p> <p>An index covering the service industry soared to a near three-year high of 55.2 from 50.5, just beating the 55.1 flash estimate.</p> <p>“The euro zone composite and services <span class="caps">PMI</span>s for May came out in line with expectations and continue to show that confidence is high,” said Neil Birrell, chief investment officer at Premier Miton. </p> <p>“With ongoing government support and loose policy from the <span class="caps">ECB</span> it should be expected that the recovery will remain robust and also fed by the pick-up in activity around the world.”</p> <p>The European Central Bank will start tapering its pandemic purchases later this year but won’t raise interest rates until at least 2024, according to a Reuters poll published earlier on Thursday. </p> <p><span class="caps">ECB</span> chief Christine Lagarde said on Wednesday the Bank would support the euro zone “well into” its recovery from a pandemic-induced double dip recession.</p> <p><span class="caps">BROAD</span> <span class="caps">UPTURN</span></p> <p>Suggesting the upswing would continue, the services new business index was the highest since early 2018 the overall composite new orders reading bounced to a near record 58.4 from 53.4 – its highest since June 2006 – as pent-up demand was released.</p> <p>German services returned to growth in May, helped by falling coronavirus infections and a loosening of <span class="caps">COVID</span>-19 restrictions, lifting overall private sector output in Europe’s largest economy.</p> <p>French business activity surged as an easing of the coronavirus lockdown fired up the service industry while in Spain the service sector expanded at the fastest pace since 2015. Meanwhile, Italy showed signs of recovery.</p> <p>In Britain, outside the euro zone and the European Union, the services sector recorded the biggest jump in activity in 24 years, after pubs and restaurants were allowed to resume serving customers indoors following months of lockdown. </p> <p>Alongside the recovery in services, euro zone manufacturing activity expanded at a record pace in May, according to a sister survey on Tuesday which suggested growth would have been even faster without supply bottlenecks that have led to an unprecedented rise in input costs. </p> <p>The euro area was expected to emerge from a double-dip recession this quarter and expand 1.5%, a Reuters poll found. </p> <p>Following a slow start, vaccination drives across the region have picked up pace and with restrictions being eased optimism about the year ahead increased. The services business expectations index rose to 71.2 from 68.4, its highest since January 2004.</p> <p>“The relationship between the surveys and <span class="caps">GDP</span> has broken down since the pandemic began, but the strengthening activity indicators bode well nonetheless,” said Jack Allen-Reynolds at Capital Economics.</p> <p/> </div>