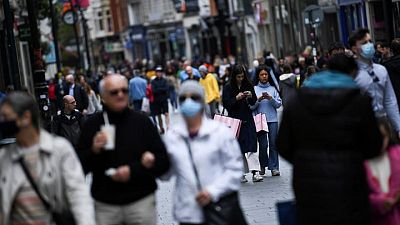 DUBLIN (Reuters) – Irish consumer sentiment improved in May to its highest level in almost two years, a survey showed on Friday, buoyed by declining incidences of COVID-19, increasing vaccinations and the further planned reopening of the economy.

The KBC Bank Ireland consumer sentiment index rose to 85.8 in May from 77.9 in April, its strongest level since June 2019 and broadly in line with the 25-year series average of 86.8.

Ireland has gone from having one of the highest COVID-19 infection rates in Europe in January to one of the lowest.

The government nevertheless opted for a relatively slow unlocking of the economy from lockdown, with non-essential retail reopening in mid-May, and hospitality only due to resume on a phased basis from June.

“The May survey saw all five main elements of the consumer sentiment index post meaningful gains on their readings in the previous month,” KBC Ireland chief economist Austin Hughes said.

“The sharpest improvement was in relation to employment that presumably was driven by the prospect of a return to work in a range of sectors.”

That suggested “a level of spending in coming months that is healthy rather than white hot,” he added.