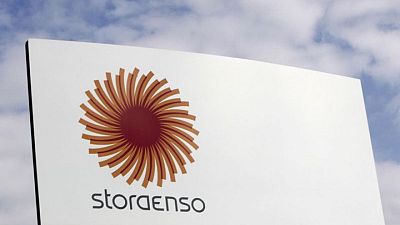 <p><body> <p>By Essi Lehto</p> <p><span class="caps">HELSINKI</span> (Reuters) – Finnish forestry firm Stora Enso said on Tuesday it would start supplying pulp for sustainable packaging company Pulpex, a research and development venture of British beverage maker Diageo.</p> <p>Stora Enso and Pulpex will also work together to build a scalable high speed production line for bottles and other packages out of pulp fibre in a commercial capacity in 2022, the companies said in a joint statement. </p> <p>“The first high-speed line will be a demonstrator to show whether we can do this on an industrial scale and at the cost level we are expecting,” said Sohrab Kazemahvazi, senior vice- president of Stora’s formed fiber unit.</p> <p>In addition to Diageo’s brands, Pulpex said it was working with Pepsi, Unilever, <span class="caps">GSK</span> and Castrol, which are committed to together produce 750 million paper bottles in a year. </p> <p>The bottles are made by molding the pulp directly into shape, skipping the step of first making it into a flat board, Kazemahvazi told Reuters. The bottle is then lined with plastic but will still fit into the paper waste stream, he added. </p> <p>“We use no <span class="caps">PET</span> barrier and if we use plastic, we want to keep the bottles recyclable and in case they end up in Nature, biodegradable,” Kazemahvazi said.</p> <p>The European Union is prioritising recycling of package materials and limiting plastic use in a plan to halve waste by 2030.</p> <p>Last July, Diageo said it would test the Pulpex bottle by launching Johnnie Walker whisky in a paper bottle in 2021. </p> <p/> <p> (Reporting by Essi Lehto; Editing by Clarence Fernandez and Rashmi Aich)</p> </body></p>