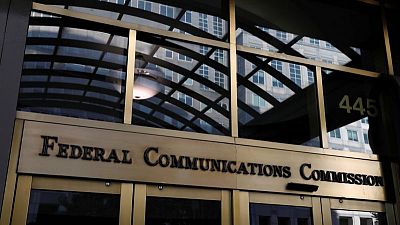 WASHINGTON (Reuters) -The Federal Communications Commission said it will launch on May 12 a temporary $3.2 billion program to provide lower-income Americans with discounts on monthly internet service and on purchasing laptops or tablet computers.

The discounts, which were funded by Congress in December, are worth up to $50 a month for internet service, and up to $75 on federally recognized Tribal Lands. Consumers can get a one-time discount of up to $100 to purchase a device from participating providers if they contribute more than $10 and less than $50 toward the price.

The FCC said on Thursday it had approved 747 companies, including AT&T Inc, Verizon Communications Inc, T-Mobile Inc and Comcast Corp – to participate.

Providers say the funding could be exhausted within four to six months. The FCC declined to provide an estimate and it is not clear what Congress or the commission will do when the funding runs out.

“In less than two weeks, we will have a new way for disconnected Americans to access the internet to carry out their day-to-day life, so they can reach the virtual classroom, take advantage of telehealth, and seek new employment opportunities,” said Acting FCC Chair Jessica Rosenworcel in a statement.

There are 33.2 million households that are also eligible for an existing program called Lifeline funded through surcharges on phone service that provides a $9.25 monthly subsidy for low-income Americans to receive broadband Internet access.

AT&T said in January if only half of those Lifeline-eligible households take advantage of the emergency benefit, the new broadband program would cost as much as $800 million a month.

Others eligible include those that are on Medicaid or accept Supplemental Nutrition Assistance Program benefits; households with kids receiving free and reduced-price lunch or school breakfast; Pell Grant recipients; and those who have lost jobs and seen their income reduced in the last year.

(Reporting by David Shepardson in WashingtonEditing by Matthew Lewis)