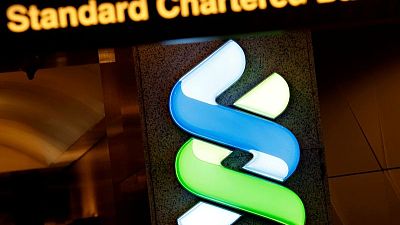 LONDON (Reuters) – Standard Chartered PLC is to reduce its global branch network by half to around 400 to cut long-term costs after the British bank reported a stronger than expected first-quarter profit.

The Asia, Africa and Middle East-focused lender, which had as many as 1,200 branches worldwide in 2014, said on Thursday it will shrink the network to a third of that total as it also gives up office space worldwide.

“Those markets that are higher on branch numbers we’ll be looking at more closely,” StanChart’s CFO Andy Halford told reporters, without giving more details, beyond noting branch numbers in the lender’s most profitable market Hong Kong were modest.

The cost-cutting drive came as StanChart posted an 18% increase in first-quarter pre-tax profit, beginning a recovery from the economic hit caused by the coronavirus pandemic.

Pre-tax profit for January-March was $1.4 billion, versus $1.2 billion a year earlier, and compared with an average analyst forecast of $1.08 billion compiled by the British bank.

The improvement was driven by StanChart setting aside less cash to cover bad loans than it had done one year ago, as well as strong performance in its wealth management business.

The move to cut branches, as well as previously announced plans to trim a third of the bank’s office space worldwide, show how StanChart is looking past short-term improvements in its results to tackle long-standing profitability challenges.

StanChart said it expected income to be similar this year to 2020, and to grow more the following year as fee-based businesses offset those being crushed by low interest rates.

One bright spot for StanChart was its often underperforming wealth management business, which had a record quarter with income up 21% on strong sales of foreign exchange and equities-related products.

Halford also confirmed that StanChart would have a look at the businesses rival Citi has put up for sale, since some were in markets where the bank already had operations, though said it was too early to decide which.

Citi said earlier this month it would withdraw from consumer banking in 13, mostly Asian markets, and Reuters reported, citing sources that StanChart as well as DBS and Mitsubishi UFJ Financial Group are among the potential bidders.

Standard Chartered shares rose more than 2% in London, among the strongest performers in the benchmark FTSE index and echoing earlier gains in its Hong Kong shares.

Last year, the bank pushed back its long-standing profitability goal of reaching a return on tangible equity of 10%, as it increased charges for bad loans due to the economic damage following the COVID-19 pandemic.

Unlike other British-based lenders such as HSBC and Lloyds that reported earlier this week, StanChart did not release a hefty chunk of the cash it set aside to cover bad loans, instead taking a further $20 million charge in the first quarter.