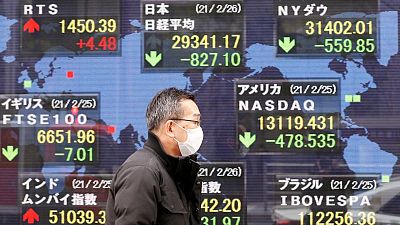 LONDON (Reuters) – Global shares extended gains on Thursday after the Federal Reserve said it was too early to consider rolling back emergency support for the economy, and U.S. President Joe Biden proposed a $1.8 trillion stimulus package.

The MSCI world equity index, which tracks shares in 49 countries, was 0.2% higher, on course for its best month since November.

U.S. Treasury yields rose 2.2 basis points to 1.6590, just shy of Wednesday’s two-week high, while euro zone government bond yields climbed ahead of the release at 1200 GMT of a set of German inflation data that is expected to exceed the European Central Bank target for a second month in a row.

In what was viewed as a setback for Germany’s recovery from the pandemic, unemployment rose unexpectedly in April and companies put more staff on shorter working hours in subsidized job protection schemes.

Fed Chair Jerome Powell said on Wednesday that “it is not time yet” to begin discussing any change in policy after the U.S. central bank left interest rates and its bond-buying programme unchanged, despite taking a more optimistic view of the country’s economic recovery.

“The Fed confirmed the roadmap for any change in policy, which is a reassuring factor,” he said. “It looks like tapering won’t materialise until 2022 and that has induced weakness for the dollar, is supportive of market liquidity and means less pressure on emerging markets.”

Biden proposed the sweeping new $1.8 trillion plan in a speech to a joint session of Congress on Wednesday, pleading with Republican lawmakers to work with him on divisive issues and to meet the stiff competition posed by China.

He also made an impassioned plea to raise taxes on corporations and rich Americans to help pay for what he called the “American Families Plan” in his maiden speech to Congress.

Stephen Dover, Franklin Templeton’s chief market strategist in California, said the effect of the tax package on markets is hard to measure for now.

“If it passes, I think it will have an impact on individual stocks that will pay a higher rate of tax or companies with founders who will pay capital gains and could sell stocks,” he said.

Markets in Japan were closed for a holiday but Nikkei futures rose 0.6%.

Investors are focused on the first estimate of U.S. GDP for the first quarter, which is expected at 1230 GMT.

The Fed’s doggedly dovish outlook and the White House’s spending plans hampered the dollar, which traded just off nine-week lows.

Oil prices extended gains on Thursday as bullish forecasts for a demand recovery this summer offset concerns of rising COVID-19 cases in India, Japan and Brazil.