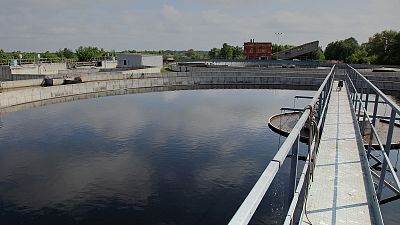 On oil and gas producing platforms, produced water is also extracted with crude oil or used to bring it to the surface. But it is often contaminated and can be harmful to fragile ecosystems if discharged without treatment.

This is why Total’s Research & Development (R&D) teams are working on nature-based solutions to this major environmental problem. The company is committed to limiting the impact of its activities on water resources and where possible reinjects produced water into reservoirs from where it was extracted, otherwise the discharge goes into the sea.

Regulations on produced water are becoming increasingly stringent and Total has stayed ahead of the curve with continuous investment in R&D. It has kept hydrocarbon content in produced water discharges below 30 milligrams per liter, as recommended by the Convention for the Protection of the Marine Environment of the North-East Atlantic (OSPAR Convention). The company also assesses and manages the risk to the environment from toxic compounds in the water, which could harm marine life.

At Total 1.3 barrels of produced water are generated per barrel of crude oil, that is already markedly lower than the industry average of three barrels. However continuing to improve the quality of produced water is a priority, any flowing into the sea must have a limited impact.

Total already expects affiliates worldwide to meet this requirement. Reaching this goal has been far from easy and innovation in biotechnology has delivered results.

Five years of work has led Total’s R&D team to develop BIOMEM, focusing on Moving Bed Biofilm Reactor (MBBR) technology. This uses microorganisms to grow biofilm naturally on floating supports in aerated bioreactors. The biofilm is used to better remove dissolved toxic organic matter from produced water. “We’ve used biomimicry to take advantage of biofilm organisms, which are more resilient to the variation of water composition. It’s also more efficient and quicker for this phase of the water treatment process,” explains Patrick Baldoni-Andrey, a water treatment specialist at Total’s Exploration & Production. He has been with the company since 2001 and currently leads a R&D team on environmental and water-related issues.

Purifying produced water is a three-stage process; it starts with the removal of hydrocarbons in a floatation phase, followed by a biological treatment - now including BIOMEM - which decreases further organic pollutants. The final phase aims to separate the free biomass from the water.

For water treatment to be sustainable in Total’s facilities, it is crucial to reduce the cost, weight and footprint of the treatment processes. “Imagine you build another platform offshore just to treat produced water, there’s going to come a time when the cost of that solution is prohibitive,” points out Baldoni-Andrey.

“Introducing a biological solution like this means there is going to be much less environmental impact and you’re cost efficient. One study we carried out revealed 125m3 per hour of water being treated costs 40 million euros, but we believe with BIOMEM we’re looking at figures up to six times lower for comparable performances,” he adds. Using BIOMEM also means processes which would have taken 24 hours using traditional hydraulic methods, during testing, take as little as an hour. BIOMEM is four to six times cheaper and takes up four times less space than existing treatments, which given its main use is offshore, means huge environmental benefits as well as savings.

After extensive testing, the R&D team were keen to pilot in the field. With the Gabonese Government advancing stricter regulations to protect the environment, particularly with regard to water, Total Gabon seized the opportunity.

Matthieu Jacob heads up Total’s R&D water treatment team at the Platform for Experimental Research (PERL) in southwestern France and is overseeing the pilot. “The main challenge was to create the biomass needed to start water treatment from scratch. Engineers sourced sediment locally then aerated it, with no bioreactor in Gabon this was the only option,” he explains, “It worked, after just a few weeks enough biomass had grown on the supports and water treatment could begin.”

The salinity levels of the produced water in Gabon are 100 grams per liter (g/l), which affects the speed at which bacteria grows, providing tougher test conditions for the biofilm. “The results show BIOMEM is robust enough for purpose and working well. It’s very positive, but we still need to see if we can get the compactness at 100g/l that we were getting at 30g/l,” says Jacob.

“Cap Lopez is the right place to introduce BIOMEM because it’s where we treat all aspects of produced water before discharge,” says Juste Milam Ndong, Total Gabon’s HSE Manager. The terminal was opened more than 60 years ago and handles almost 70% of Total’s oil production in this west African nation. “Once we get all the data back to the R&D team, we can start looking at how things might work when we scale-up and industrialize the process,” he continues.

Pipe blockages, power cuts and mechanical failures are part of the day-to-day running of a large oil facility anywhere in the world. In the face of some unexpected outages, including the failure of the aerator, BIOMEM performed better than expected in Gabon. “The fact it was a biofilm meant it held better, even in less-than-ideal conditions. Once the aerator problem was solved the process really took off again, quickly and more efficiently than we had imagined,” reveals Jacob from his base back in France.

There is broad agreement, the first results from Gabon are encouraging. “It’s time to take it to other sites, both offshore and potentially onshore, which means we can really democratize usage,” he says, “I think in 4-5 years we’ll have it in wide circulation. We’re working on lots of different techniques in relation to produced water, and this one has really delivered.”

Water remains a vital resource for oil and gas operations as well as in the development of renewable energies. BIOMEM could be a process taken into several other branches of the group, with potential uses already identified in the refining process.

“These sorts of ideas are the backbone of Total’s environmental goals,” says Baldoni-Andrey, “We are working on other processes for all sorts of different issues. Take the reinjection of water into reservoirs, if we could do that easily and immediately, we could say that we don’t have any discharges from the process. That’s certainly a point we’d like to reach.”

His R&D team is pioneering ways of creating biomass using bacteria and microalgae, which will help offset CO2 emissions, as well as looking at microalgae to produce biogas and biofuels.

Ways of working will change as Total realizes its ambition to become the responsible energy major, BIOMEM will be a part of that change, “We often work in partnership with other large companies so I think it’ll be used widely and will improve practices overall rather than be a source of competition,” Baldoni-Andrey explains, “It will help us all move forward in this sector and not just to cut costs. With BIOMEM, we have broken what I describe as a ‘lock’, in a technical sense, which means we can all benefit.”