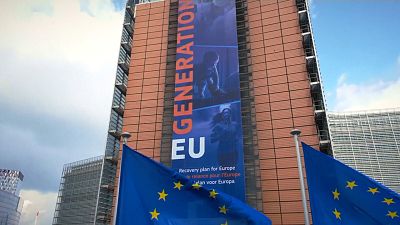 The EU economy is starting to wake up again after suffering the consequences of the Covid-19 pandemic.

However, it is far from over and the recovery is not going to be smooth.

For this episode of Real Economy, Euronews went to the Brussels Economic Forum and spoke to the European Commissioner for Economy, Paolo Gentiloni - and the European Council President, Charles Michel, about the EU's €1.82 trillion joint recovery package, and how it is helping to cushion the economic fallout.

To help growth, the EU came up with a two-fold response: a new investment plan called NEXT GENERATION EU - and a reinforced long-term European Union budget.

EU Council President, Charles Michel, said the decision was made in July.

"We acted fast and we acted strong. Within a few weeks we managed to get all 27 heads of state and government to agree to mobilise the unprecedented amount - €1.8 trillion euros for the coming years to fundamentally change our economic and social model with the climate and digital agenda. This will be the basis of our strategy for the future of Europe," he said.

The European Commissioner for Economy, Paolo Gentiloni, described the decision as 'extraordinary',

"For the first time we are issuing common debt to support common purposes. Of course, it is not the only response because we are not a federal state. We have member states with their own responses. And if we look at the general picture, we see both the national and the common European response. Now, for the common part we need to coordinate all member states to our common priorities, which is the green deal and the digital agenda, and the resilience of societies," he said.

ROLE OF THE STATE

EU Council President, Charles Michel, said it has changed the role of the state.

"Just think what would have happened without these public interventions! An expanded role is there, in any case. But we have to ensure that the stronger role of the state is not substituting the private sector and is not disrupting the level playing field in our single market, because when you say ‘state intervention’ - you know that states are not with the same strength within our Union. So we have to balance with our common policies the risk of divergences among member states," he said.

"I think the Covid-19 crisis has demonstrated very clearly that there was a common interest of the 27 European countries in being more autonomous and independent on strategic plans. And that is why climate and digital ambitions are our best focus, and they are also very important to get the support of the European citizens, particularly young Europeans," he added.

The EU is working to become carbon-neutral by 2050 - and Charles Michel said now there is more determination to achieve it.

"Because over the past few months there has been more awareness that the climate agenda is not something secondary. This is something vital. It is vital to keep moving forward."

"Well I think that the pandemic was also an opportunity of forced training - if we want both for our new digital tools and for the importance of the environment and climate. For now I think we have to insist and go on this Green Deal agenda stronger than before. We need two things. One is to facilitate public investment and second - we need to coordinate all national recovery and resilience plans to the green deal target.

Despite the funding boost, there are still lingering uncertainties, also acknowledged by the EU Commissioner for Economy.

"Options are frequently created by events. For the time being, I think our main goal is to try to install confidence and to fight uncertainty. Because we are not in the second wave of the pandemic, but we have several local outbreaks.

"And this is creating a risk of a new uncertainty. So the rebound of our economy is underway, but to gain speed we need to have more confidence. So the European package is absolutely crucial, not only from the economic point of view, but also I would say psychologically. Yes, we have a European package, so we can be confident that no single member state will be left alone and we will be able to recover together. This is a strong message from Europe," he added.

Is Europe heading for a K-shaped economic recovery?