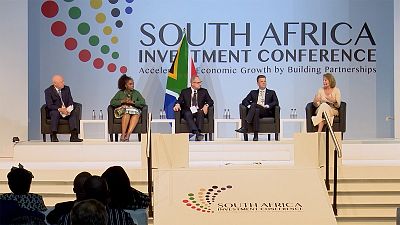 Sandton is Africa’s richest Square Mile. Based in Johannesburg, South Africa, it was within this thriving financial district, in 2018, that President Cyril Ramaphosa announced his ambitious vision to drive investment of up to €90 billion over a period of 5 years.

Over 1,700 people from 22 countries converged at the second inaugural South Africa Investment Conference in Johannesburg. The gathering that was part of the president’s push to improve Africa’s second largest economy and deal with the 29.1% unemployment rate.

Exactly 1 year since the maiden summit, 8 of the 31 projects announced have been released with 17 at implementation stage.

“The rate of investment commitments made today is in the order of R363 billion rand,” said President Ramaphosa. “We’ve received indications of a further R8 billion rand of investments that are still subject to board approvals. These investments will conservatively lead to the creation of about 412,000 direct jobs over the next 5 years.”

We are saying come because of our infrastructure and our accessibility to reach our counterparts in the continent.

Central to many discussions within the textile, energy and high tech sectors was South Africa’s favorable access to global markets. Trade agreements within SADC and the BRICS nations for example, encouraged value chain investment.

The country has set a target to be placed among the top 50 global performers on the World Bank’s Doing Business Report within the next 3 years. Significant improvements are noted in this years report in areas such as setting up a business and trading across borders.

“We have really found great partners with the department of trade and industry and specifically the team at invest South Africa,” says Jeanne Du Plessis, Corporate Affairs Chief with Proctor and Gamble. “Understanding the frameworks for investment incentives in the country and supporting us with some of the more operational aspects of bringing in new manufacturing investments into the country. Just last week, we had the official commission of an “Always” plant for a new “Always” line in South Africa. Increasing our manufacturing jobs by 30%, it’s a R300 million investment and we are really looking forward to doing more of the same.”

French companies Total, Air Liquide and Alstom promised to invest over $1.3 billion over the next 3 years.

“French companies understood the message a long time ago, today we have more than 65,000 direct jobs that are provided by French companies,” says Dr Yves Guenon, the President of the French South African Chamber of Commerce. “Unfortunately the vision of our French compatriots outside is tainted by visions of insecurity, and corruption, but if you look at this city Sandton is a modern European city here we do business as we would do in Europe with the highly developed banking sector with an independent judiciary so we all have to do business.”

So it seems South Africa’s focus on entrenching a business friendly environment is on track to reaping the rewards of long term investment prospects across a variety of sectors.