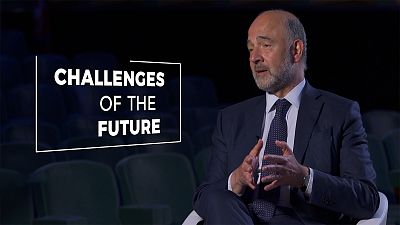 The Brussels Economic Forum is Europe's answer to Davos - it is the flagship economic event of the European Commission that happens annually. This year was the 19th time European policymakers, academics and business leaders gathered to debate the current challenges facing the EU.

One major development in Europe at the moment is the rise of the far-right. Predicted surges in support for populist groups did not materialise in the recent European Parliament elections but they have slowly gained ground over the last decade. Some of the forum's attendees pinned this on growing income inequality. Manuel Muniz is the Dean of IE School of Global and Public Affairs:

"In my mind the fundamental trigger for this is the state of the economy and the impact of, in particular, technology and technological change in the jobs market and the effect that is having on income generation and income distribution within the economy. Between 2009 and 2012, 95% of all income growth in the US went to the top 1%. 95%!"

Another key talking point at the Brussels Economic Forum was Europe's approach to economic growth.

The forum questioned the notion of economic growth being the principal indicator of a healthy economy. Valdis Dombrovskis is the European Commission's Vice-President for the Euro and Social Dialogue:

Although Europe lags behind in economic growth compared to other major world economies, it does well in the Inclusive Development Index. This is an alternative measurement of economic development that focuses more on median living standards. The index was set up by the World Economic Forum to better represent economic development felt by ordinary people. Where GDP can overlook inequality - the Inclusive Development Index aims to include it.

In 2018 a number of the top 10 highest scoring countries were in the EU. 9 out of 10 were part of Europe's single market.

What is Europe's new economic agenda?

"We must reform the eurozone further, we must reach a true eurozone budget, we must be much more ambitious in the future and being capable of creating convergence through stabilisation."

We must move on with the fair taxation agenda. We must also be capable of changing the rules of the game with qualified majority voting and we must also tackle the climate change urgency."

When asked if he favoured multilateralism or bilateralism he was definitive in his response:

I would say that to president Trump - trade wars are not positive and they are not easy to win. There are lose-lose for everybody and there will also be a lose-lose for the United States if they go on with that. That is why we can still, of course, recognise that there are problems with China - over-capacities, cyber-security, a form of aggressiveness… But these problems need to be tackled in the multilateral framework. So the method is certainly not the right one."